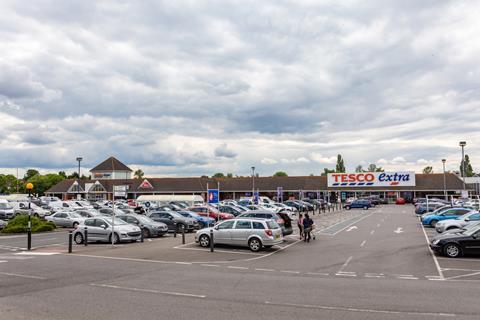 Tesco is to repurpose excess space at its stores as a network of “urban fulfilment centres” to ramp up its offer for online shoppers.

CEO Dave Lewis said the first of the new centres would open in the next 12 months and were part of a plan to make Tesco more “agile” in the face of growing competition in the online delivery space from the likes of Amazon.

He said Tesco planned to build the new fulfilment centres adjacent to existing stores, using excess warehouse space created by the reduction in its range under Project Reset. He said the plan was to have micro-fulfilment centres which would allow Tesco to pick from the back of stores, avoiding disruption to in-store shopping.

Tesco also plans to massively ramp up the number of stores carrying out deliveries under the plan.

“The work we’ve done on grocery home shopping is now making that business profitable,” said Lewis. “But what we are looking at is the idea of creating urban fulfilment centres adjacent to stores. It’s about how we increase the picking capacity of existing assets, being able to put fulfilment centres in space that we’ve got in stores.”

The move comes as part of a continuing plan to repurpose space in Tesco stores, which Lewis said could also see GM space in 67 stores replaced with its F&F clothing offer.

Plans for a range of upmarket Finest shops to take on Marks & Spencer were among ideas unveiled by Tesco in a presentation to analysts yesterday.

A slide shown to analysts shows the Tesco Finest banner on a small store featuring premium products, a café and indoor eating area.

Tesco has talked previously to suppliers about the potential for ramping up its Tesco Finest offering in affluent areas.

In 2012, The Grocer revealed how then-chief executive of its UK business, Richard Brasher, told suppliers “affluence is the new format” and planned a range overhaul depending on the areas stores were located in.

Yesterday’s presentation showed how Tesco was pursuing a three-pillar concept to its continued recovery, under product, channels and customer.

Under the product pillar, Tesco said its strategy of focusing on own brand was massively outstripping the growth of brands, with the Exclusively at Tesco range generating £380m of sales in the first year.

It also said its supplier cull under Project Reset had achieved major volume growth for the suppliers who remained.

“Not everything we showed will happen,” he said. “But it’s important to show investors the sort of things we are thinking about.

“The critical thing for investors is that they understand having gone through the turnaround there is a very bright future for the business irrespective of what the current trading conditions may be.”

Bruno Monteyne, senior analyst at Bernstein, said: “The consumer markets day was not about impressing through multibillion-pound cost savings targets or listing a vast number of numerical targets where the company will catch up.

“This was about bombarding and impressing investors with the breadth and depth of their retailing skills.”