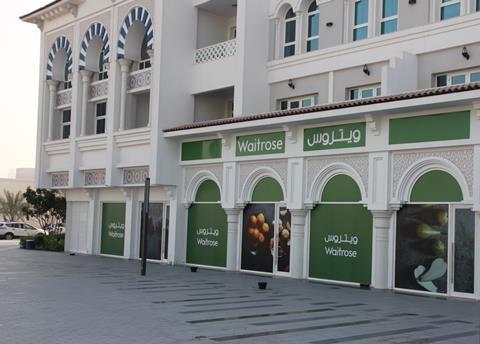 Waitrose has opened its fourth Dubai store in the Dar Wasl shopping centre.

The 4,900 sq ft convenience store is designed to offer “a top-up shopping offer for both ex-pats and local Emirati customers” with a wide range of products including Essential Waitrose and Waitrose 1 lines.

Waitrose now has nine branches in the United Arab Emirates, four of which are convenience stores.

The high-end retailer first entered the country when it has began stocking its products in its B2B partner Spinneys. In 2008, it struck a licensing deal with Spinneys to operate certain stores under the Waitrose brand.

At the time, Waitrose said it hoped to have at least 20 branded stores in the United Arab Emirates by the end of 2010.

Last month, Waitrose announced its commercial director Matt Frost was leaving to take the helm at Spinneys, which could accelerate its growth in the UAE.

Barry Delehanty, head of B2B growth & development at Waitrose, said the store would focus on offering “high levels of customer service and quality food that shoppers expect from the Waitrose brand”.

“We’re seeing ever-increasing demand for Waitrose products from global audiences - either from British people who have moved abroad, or from those who have heard about our great products,” he said. “Our quality and provenance really appeals to the international market and we’re proud that our brand continues to retain the trust of customers wherever they are in the world.”