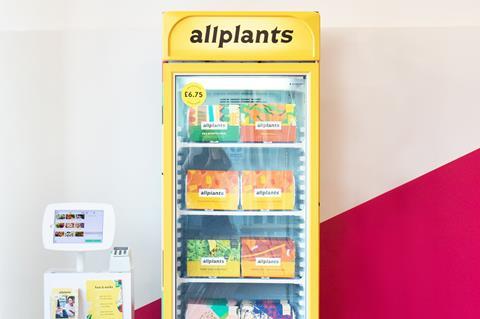 Two “self-checkout freezers” have been installed in a shared working space for startups in White City, London, and there are plans to roll out the initiative to offices and gyms nationwide.

Nine dishes from Allplants’ range of frozen ready meals are offered, including Cashew Mac and Rigatoni Carbonara, with prices starting at £6.75. Customers can scroll the menu and select their meal on an iPad installed adjacent to the freezer in the shared office, run by Huckletree. They can then tap their contactless payment card to open the freezer door.

Installed last week, the freezers were a test “as we look to improve and scale up into workplaces and gyms nationwide”, said an Allplants spokesman.

Orders are taken online of boxes containing six ready meals, either as a one-off or on repeat subscription.

“As part of encouraging millions of people to fall in love with plant-based food, we’ve always aimed to make every delicious recipe our chefs create easily available to everyone, any time,” said Alex Petrides.

“We’ve launched a little experiment with Huckletree, and we’re excited to see where we could be popping up next.”