Delistings have hit a third of suppliers since crisis hit UK 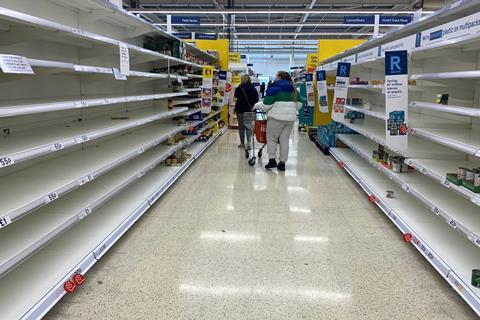 A third of suppliers have had products delisted by retailers since the start of the coronavirus outbreak, a survey for The Grocer reveals.

The survey, carried out by GSCOP experts The Retail Mind, revealed 33% of suppliers said they had seen products delisted since the crisis began in March.

Asked if any retailer had behaved in a way contrary to GSCOP in the past five weeks, 31% of the 40 suppliers to respond said yes.

That was despite more than 70% saying collaboration with retailers since the outbreak began had either met or exceeded expectations.

“We had feedback from suppliers to say that some retailers had been delisting without notice, although they did say that they are only temporary,” said Retail Mind founder Ged Futter.

The survey showed suppliers have continued to face turmoil despite some calming down since the peak of panic buying last month.

“The survey found 36% of suppliers say that their needs are changing every day,” said Futter. “Retailers are struggling to know what the ‘new norm’ is and this is having a massive knock-on impact.”

Coronavirus has also had a crushing impact on the pipeline for new products, with more than a third saying some NPD had been scrapped and over a quarter stopping it altogether.

This week, Groceries Code Adjudicator Christine Tacon told the Grocer the BRC had called on the government to suspend GSCOP during the crisis. However, she said she had explained to ministers that GSCOP had the flexibility to allow retailers and suppliers to thrash out temporary arrangements for what constituted reasonable notice without suspending the code.

BRC head of food policy Andrew Opie said its move had been to “ensure the measures to increase food supplies from the limited suspension of competition law were not inadvertently affected by GSCOP. This is primarily where retailers need to change contracts at short notice, for example to rationalise ranges in order to maximise production of the most popular lines by a manufacturer. We were looking for reassurance that by acting in the way the government wanted - supplying the food people need - we were not falling foul of GSCOP.”