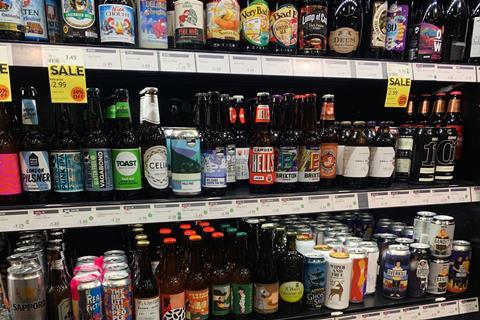 The shake-up will involve the introduction of new craft brews, as well as “commodities” and more mainstream brands

Whole Foods Market is eyeing a shake-up of its beer range, but says it will shun low and no innovation due to concerns over ingredients.

The Amazon-owned retailer said it had “been struggling for sales due to competition in the market, mainly from supermarkets”.

Its product co-ordinator Nicole Casey told The Grocer it planned to boost its beer range to create “more balance”.

This will involve not just the introduction of new craft brews, including collaborations between US and UK brewers, but also “commodities” and more mainstream brands as “even the craft consumer has a desire to be able to purchase more than just the craft range”, she added.

Yet unlike the supermarkets, the retailer won’t be jumping on the low and no alcohol trend.

It currently sells a small range of low and non-alcoholic brews such as Adnam’s Ghost Ship, and BrewDog’s Punk AF and Nanny State brews.

But Casey said many brands in the fast-growing sector did not meet Whole Foods’ ingredient standards.

“We’ve been approached by a lot of brands and we’ve seen great growth within that category,” she said.

Yet Whole Foods could not accept “some of the additives and some of the flavourings”, she added.

“It unfortunately has been a disqualifier with some of the emerging brands.”

It has also avoided jumping on the CBD bandwagon until “all issues regarding the regulatory status are completely resolved to our satisfaction”, it said.

William Reed - the publisher of The Grocer - has launched a new trade show for the Low & No Alcohol sector. For more info visit low2nobev.com