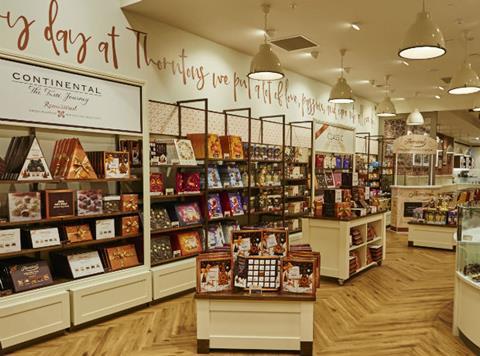 Ex-Thorntons chair Paul Wilkinson has blasted Ferrero’s management of the 110-year-old chocolatier as the Italian owner called time on its high street stores.

Ferrero this week said the remaining 61 Thorntons shops would not reopen when lockdown lifts next month, with over 600 staff affected. The chocolate maker will continue to trade online, and to sell its products in supermarkets and other retailers, with the 104 franchise stores also remaining open.

Thorntons retail director Adam Goddard blamed the closures on Covid lockdowns, which disrupted trade over the important Easter and Christmas holidays, but said the business had been operating for a long time in “a tough and challenging retail environment”.

Paul Wilkinson, who was chairman of Thorntons in 2015 when the then plc was sold to Ferrero for £112m, told The Grocer that, notwithstanding Covid, the new owners “failed to understand the business model”.

“Thorntons is a vertically integrated business and requires critical mass for the economics to work,” he said. “It was especially sensitive to volume changes as it earned margin both in the stores and factory.

“Ferrero had the opportunity to exploit the Alfreton factory, which is a state-of-the-art production facility, and thus reduce the interdependency; they did nothing.”

“The in-store experience for the consumer with Thorntons ranges, especially in moulded products and decoration, is not matched anywhere,” he added. “The Thorntons consumer will not migrate to Hotel Chocolat.

“I’m surprised Ferrero did not keep some of the best stores open to simply act as brand ambassadors. The good stores were always very profitable. The stores were the brand; and I fear, now they have gone, the brand will die.

Wilkinson expressed regret over the decision to sell Thorntons to Ferrero.

“When [investment bank] Rothschilds invited me to meet Giovanni Ferrero in the summer of 2015, I really believed this would secure the future for Thorntons,” he said. “They had the financial resources we never had as a plc. They could bring volume, synergies and expertise.

“How wrong I was. There is no doubt some of the other options we had at the time of the sale would almost certainly have done better than this.”

Ferrero has invested £45m in Thorntons since the takeover, made up of £35m in the factory and to develop the business in grocery channels and online, as well as £10m as part of a retail transformation plan to improve store layouts and converted seven shops to the new upmarket café format.

The Italian confectionery giant also injected £170m of share capital from the Ferrero Group to reinforce the financial structure of the Thorntons business following a big reduction in the retail estate and continuous historic losses.

Ferrero now plans to focus on the ecommerce side of the business following a big consumer shift to online during the coronavirus pandemic. Thorntons has experienced growth of 71% in digital net sales over the past year, with more than three-million customers using its online shop.

“We will continue to invest in building our brand with our existing franchise partners on the high street and our grocery partners in supermarkets to meet the demand from our loyal customers,” a Ferrero spokeswoman said.

“We are continuing on our journey to produce more Thorntons and Ferrero assortment products for the international market – the first being our Golden Gallery collection now available in the US and Canada.

“Thorntons is a key priority and remains a valuable part of our UK business, we will continue our commitment to ensure its sustainable growth.”