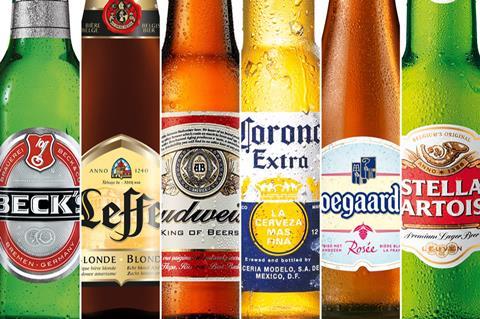 The world’s largest brewer AB InBev (ABI) said it experienced a “challenging” third quarter, with sales and profits lagging expectations due to declines in the US and China.

The maker of Budweiser, Corona and Stella Artois reported flat Ebidta year-on-year at $5.3bn, below analysts’ expectations of a 3% rise, as a result of cost of sales headwinds and marketing spend.

Sales in the third quarter increased 2.7% to $13.2bn, while in the nine-month period since the beginning of the year, revenues were up 4.8% to $39bn, driven by “healthy growth from ongpoing premiumisation” and revenue management initiatives.

Combined revenues of its three global brands, Budweiser, Stella Artois and Corona, grew by 4.1% globally, and by 5.2% outside of their respective home markets, while growing 6.4% in the nine-month period.

Total volumes declined 0.5% as “solid growth” in Mexico, South Africa and Colombia was offset by declined in China and the US, both driven by shipment phasing impacts.

Normalized profit attributable to equity holders of AB InBev in the quarter was $2.41bn versus just $1.51bn in the same period in 2018, while in the nine-month period it jumoed to $7.12bn from $4.84bn.

Underlying profit (excluding mark-to market gains linked to the hedging of share-based payment programs and the impact of hyperinflation) was $1.87bn in the third quarter compared to $2.19bn last year.

Ab InBev said it continued to expect “strong revenue growth” for the full-year, but warned that Ebitda growth will be “moderate” due to the headwinds faced in the third quarter. It had previously expected strong earnings growth for the full year.

The latest results follow a busy summer for the brewer after the listing of a minority stake in its Asian operation for $5bn and sell off its Australian business to Japan’s Asahi for $11bn.

In this week’s issue of The Grocer read about how startups are feeling unsupported by the wider retail insustry, bottling giant Refresco took a £8.1m hit from the acquisition of peer Cott and Bear owner Urban Fresh Foods saw sales go backwards in 2018, reversing its previous rapid growth.

Check out thegrocer.co.uk/finance for all the details.

As the UK awaits decision from the EU on whether a three-month Brexit extension will be granted, the pound rose marginally against the dollar trading at $1.2857.

C&C (CCR) closed up 4.4% at 378.50p after posting a first half rise in net sales and profits despite lapping tough comparisons after the bumper summer of 2018.