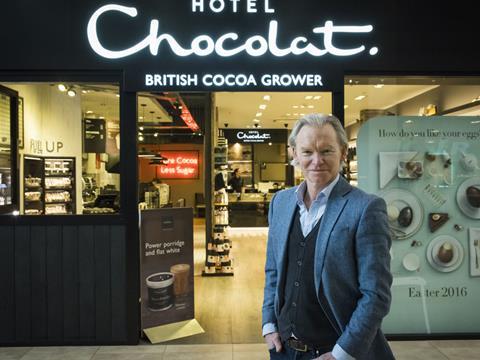 Hotel Chocolat has set out ambitious plans to revamp and grow its estate on the back of a 12% increase in year-on-year sales.

The luxury chocolate brand reported revenue of £104m in a trading update for the 52 weeks ended 25 June 2017, up from nearly £93m the year before.

CEO Angus Thirlwell named the ‘shop plus café’ format, available in 19 of its 98 branches, as a highlight of its performance.

In an interview with The Grocer, Thirlwell set out plans to revamp the estate to include cafés in all branches, and said he expected to complete a “significant” proportion of this work in the next two years.

Thirlwell is also keen to press ahead with expansion plans, with a target of opening one outlet a month in the coming year.

Over the past 12 months, Hotel Chocolate has opened 12 new branches, eight of which have a café.

“We’re really pleased with how the shop plus café format is working,” Thirlwell said. “I suppose the strength of the concept is that it can work in a variety of different types of locations. On one hand, we have a city centre store in Leeds, which is a very big, bold and confident expression of the format, and we opened a similar one in Glasgow four weeks ago,” he added. “But we also have really good results in smaller locations like Euston Station in London, Beverley and Bury St Edmunds.”

Thirwell said online sales were also continuing to perform strongly - accounting for 25% of revenue - in the wake of its site revamp to become compatible with mobile and tablet devices.

He also revealed the relaunch of its subscription business, sales of which were down 6% in its latest half-year results, would likely be ready by September.

“This year has been spent planning and improving our subscription offer so we’re very excited at the prospect of ‘subscriptions 2.0’,” he said. “It’s one to watch in the future.”