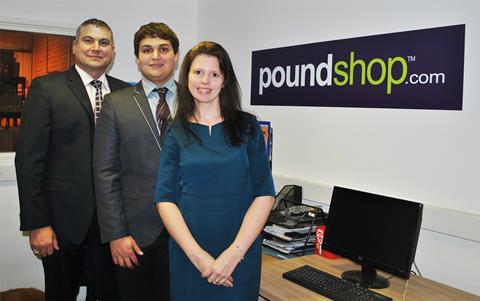 Poundshop.com’s sales tripled following its re-launch in October, with grocery accounting for almost two-thirds of growth. Sales shot up threefold in just the first month after the re-launch, followed by a further 20% month-on-month sales growth in December for the single-price e-tailer.

“I’d estimate that about 65% of our sales are grocery products since the re-launch,” said managing director Donna Baker.

“Christmas was a whirlwind. We fulfilled all our orders, but it involved a lot of very late nights and weekends, it was crazy!” Chocolate, biscuits, and nuts were all amongst the most popular items, Baker said.

The boost to sales has come thanks to a surge in website visitors, with an average of 250,000 visitors per month since the re-launch comparing favourably to 76,000 per month before. “The new website had a really big impact,” said Baker, “as did our expanded range. Customers took notice of that.”

Baker said sales were also boosted by the popularity of their cosmetics range, especially after a Calvin Klein promotion on the site.

After a year working in the online single-price retailer business, Baker says one of the most important lessons was finding the right shipping model. “We’ve found the 3-2-1-free shipping model works best, but we’ll continue to review it over time as it’s such an important aspect of the business model.”

Baker said 60% of Poundshop.com visitors come to the site via their mobile phones, so having a website responsive to mobile phone visitors was also crucial.

“We’re learning as we go. I can see why people would see this kind of business is challenging, but if you go into something thinking this won’t work, well, it won’t,” said Baker.

“We’re in a new area of online shopping and we’ve found that for now it’s important to keep everything close to us, so Steve and I take phonecalls from customers to discuss their experience and we’ve brought the distribution in-house so we can manage it directly.”

Following its successful first months, the company is now recruiting for its buying and distribution team.