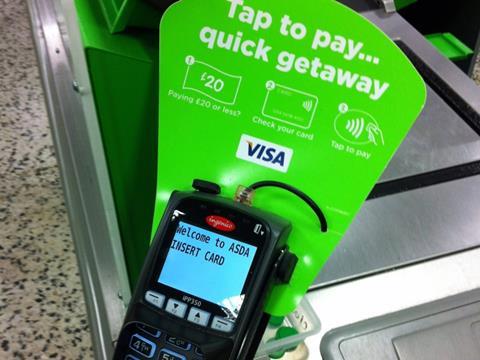 Retailers could be missing out on valuable sales by failing to offer contactless payment at the checkout, new research from Barclaycard has revealed.

The study of 305 retail businesses from 25 to 27 August found that just one in three (34%) currently accepted contactless. This is despite a separate survey of 2,003 consumers showing this now the preferred payment method for them (48%).

Almost half of shoppers (45%) think all merchants should now accept ‘touch and go’ payments and 19% feel annoyed if they can’t pay using the technology.

However, retailers who would not consider adopting contactless payments cited reasons such as it not being necessary (36%) or not believing it has any benefits (29%).

Those who accepted contactless said it helped them to keep up with their competitors (85%) and that it offered a benefit to their customers who found contactless more convenient (79%).

Supermarkets have led the charge in the adoption of new payment technology, with almost a third (29%) of all contactless transactions made in supermarkets.

Barclaycard said that with the contactless limit recently increasing from £20 to £30, this means the average cost of a basket of goods can now been covered in a single contactless transaction.

The result has been that Waitrose contactless use has rocketed by 20% since the limit increase rose to £30 in September.

Surprisingly, half of retailers were unaware of the contactless limit rising to £30 (54%); nearly two-thirds of those who accepted contactless (61%) said this would be good for their business.

They cited key benefits such as the ability to serve more customers during busy periods (68%), reducing queues at tills (65%) and giving customers a better in-store experience (54%).

“Our customers are making more trips to stores but buying less each time so contactless payments fit in with the demand for an easier, quicker shopping experience,” said Matt Clifton, head of retail change at Waitrose.

“We are committed to offering a range of payment options to suit individual needs, and customers have come to value contactless, recognising it as a convenient method of payment.”

Tami Hargreaves, commercial director, digital consumer payments at Barclaycard said: “There is still work to be done, however, to encourage retailers to see the benefits of accepting contactless and new and emerging payment types - a move which in an increasingly competitive marketplace is vital to help businesses attract new customers and retain existing ones.”