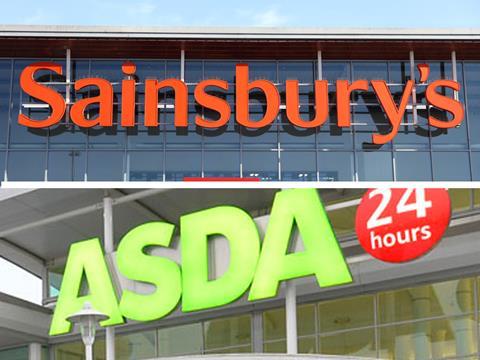 The survey of 1,000 shoppers, carried out this week by Toluna, gave the proposed merger between Sainsbury’s and Asda a warm welcome

Shoppers have given the proposed merger between Sainsbury’s and Asda a warm welcome - and the retailers could be in for a sales bonanza if they can live up to their pledge to lower prices by 10% on everyday products.

These are the key takeaways from an exclusive new poll carried out for The Grocer (below) into what shoppers make of the merger plans.

The survey of 1,000 shoppers, carried out this week by Toluna, found strong awareness of what was happening, with just under 90% having heard about the move. It also found that 84.8% of shoppers thought the deal would be good news if it led to lower prices.

However, shoppers appear split over Sainsbury’s CEO Mike Coupe’s assertion that the deal will not lead to a reduction in choice. He hailed the deal, which will result in a combined operation with sales of £51bn, as “a transformational opportunity to create a new force in UK retail, which will be more competitive and give customers more of what they want now and in the future”.

There were also strong levels of concern for suppliers and farmers, with 70.9% worried the deal would give the combined business - with a 31.4% share of the UK grocery market, according to the latest figures from Kantar - too much power.

“With just over 31% of the market potentially being held by one company, the Competition & Markets Authority is likely to consider the impact on shoppers - but that must also take account of changes to supply arrangements that could give rise to a reduction in choice and availability over the long term,” said NFU president Minette Batters.

“The impact of the whole supply chain, all the way down to farm level, needs to be carefully assessed. The NFU supports any investigation by the CMA and we would aim to feed into this if approached.”

In terms of the impact the deal will have on the quality of products, 29% felt it would lead to an improvement in quality for Asda. A quarter of shoppers said they expected the quality of Sainsbury’s lines to fall, though a third did not think this was likely.

“In the wake of the announcement, each brand will need to be conscious of shifting consumer sentiment in months to come, particularly how it affects their separate brand identities.” 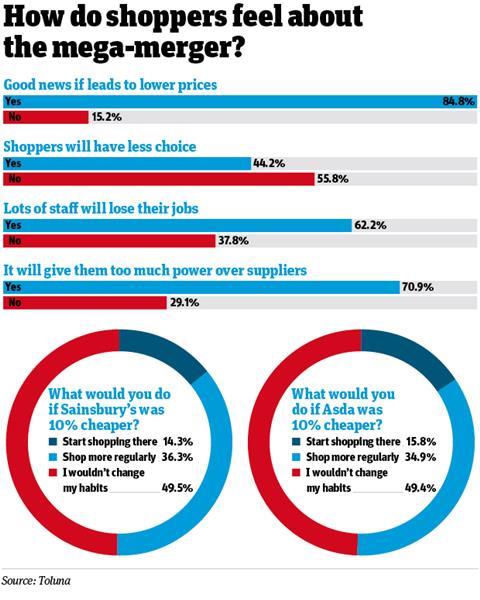