Get ready for Sainsbury's-Asda pressure, suppliers

In order to divert the unions and the CMA, Mike Coupe’s announcements on Sainsbury’s merger with Asda shamelessly promoted the fact that suppliers would be back on the rack. Of course the CMA can’t build supplier abuse into its thinking, and of course the buyout will go through. 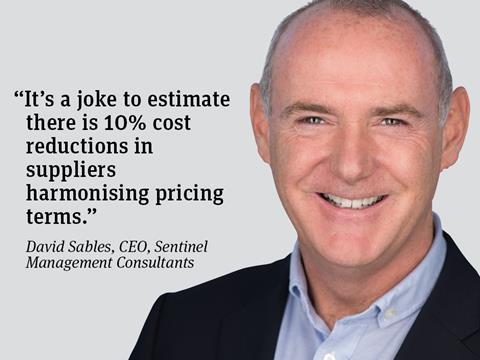 It’s a joke to estimate there is 10% cost reductions in suppliers harmonising pricing terms. Not many have got their terms that badly wrong. Asda and Sainsbury’s are about the same size and will broadly have the same cost prices. If being 30% of the market meant buying 10% better then you’d see it now in Tesco’s in-store pricing. Even if there were 3% or 4% hanging around, it doesn’t mean the supplier can afford to just hand over the cheapest price to both.

Suppliers need to be ready though, because the promised pressure will come. They need to first understand their strength with shoppers, review their pricing terms with both and prepare their list of trades where a more business better discount is possible. Maybe there are some examples of this opportunity for, say, own label suppliers of one and not the other. But again: not worth 10%. Asda own label suppliers not in Sainsbury’s need to look carefully at their business model without either of them.

The real pressure doesn’t ultimately come from the buying power of a 30% entity. It comes from the diminishing ability of suppliers to mitigate their risk across a fragmented customer base. The business school rule is to avoid having over 15% of your sales with one customer. Now with two customers at 30%, the fmcg market is a hot old kitchen to work in.

To achieve reductions Sainsbury’s will need to create a believable delist risk that can be threatened across both businesses. Both sets of buyers are GSCOP aware, unlike with Tesco-Booker, and delist threats can be done within the code, but not so easily “without merging buying teams”. Remember, suppliers, that two intelligent buyers previously listed you for a reason. So if another buyer for those same shops asks you for a discount with a delisting threat, know they won’t have the power to easily effect a delist across both businesses. The sell plan has to be married to the buy plan. Sainsbury’s will not risk alienating its shoppers through this.

Data-based decisions will rule and as soon as Sainsbury’s has pushed the Nectar card through Asda stores and started to get collective shopper data, the category buyers will become one. Captain America has cut you loose, Asda team.

Really - “no job losses and better choice”? Just like Asda Cola, I’m not buying it.