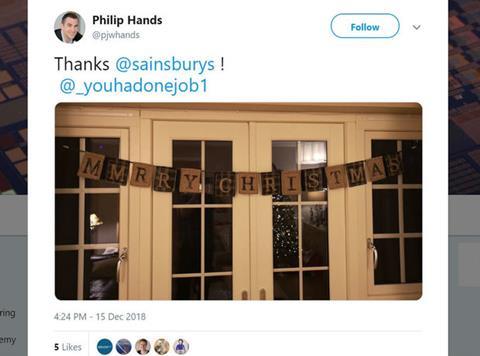 Sainsbury’s has apologised to customers after misspelling ‘Merry Christmas’ in several different ways on festive bunting.

In one case the bunting said ‘Merry Chrystmas’. Another said ‘Merrt Christmas’, a third said ‘Mmrry Christmas’ and a fourth read ‘Mersy Christmas’.

In a fifth case to come to light, Christmas was spelt ‘Chrirtmas’.

The mistakes emerged on Twitter as Sainsbury’s customers posted pictures of the misspelt Christmas banners.

One wrote: ‘Thanks @sainsburys! @_youhadonejob1’

In Sainsbury’s, saw what I thought was a bargain, bought it, soon discovered why…@sainsburys pic.twitter.com/AivvH6CYB9


Another said: ‘In Sainsbury’s, saw what I thought was a bargain, bought it, soon discovered why.’

Sainsbury’s replied: ‘This certainly isn’t the quality we expect our customers to receive, I apologise for this.’

“Our Christmas helpers clearly need to practise the elf-abet,” a Sainsbury’s spokeswoman told The Grocer.

The mistakes are said to have affected a very small number of the banners.