Sainsbury’s trial to ditch Fairtrade for its own weak and woolly Fairly Traded equivalent has provoked an outcry and turned into one almighty PR fiasco. All the major charities - Cafod, Oxfam, Christian Aid et al - have hauled Sainsbury’s over the coals. At least three internet petitions are calling for Sainsbury’s to stick to true Fairtrade. As I write, the largest has over 88,000 signatures.

A parliamentary motion calling on supermarkets to back the internationally trusted Fairtrade mark already has cross-party support from 40 MPs. 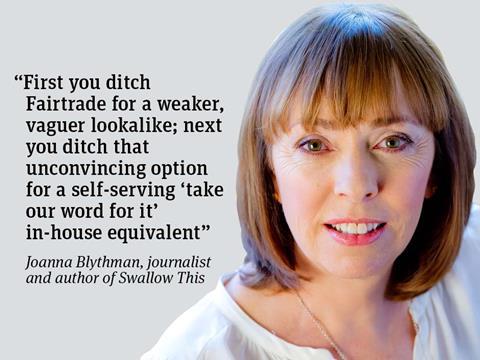 My Twitter feed shows a steady drip of damaging comments, such as: ‘Another weekend passed without our weekly trip to Sainsbury’s. Will continue to boycott ’til commitment reinstated #Fairtrade.’

What a shambles. I almost feel sorry for Sainsbury’s. It’s taking the flak when Tesco and Mondelez are up to the same tricks, the difference being that Sainsbury’s had previously done a better job than the other two in convincing consumers of its good intentions on Fairtrade.

Consumer trust is hard earned and easily lost. If corporates want us to believe that they are indeed ethical concerns, then cherry-picking rent-a-cert bodies to aid and abet the lie that Fairtrade-lite can deliver social justice and equity for farmers and grocers won’t do the trick.

Any fool can see the downward spiral. First you ditch Fairtrade for a weaker, vaguer lookalike, next you ditch that unconvincing option for a self-serving ‘take our word for it’ in-house equivalent.

Unfortunately the Fairtrade Foundation made a major strategic error in going along with Mondelez’s kick-in-the-teeth Cocoa Life scheme. The rot was never going to stop there. Corporates are control freaks. They instinctively seek absolute command of the food chain.

The Co-op and Waitrose will only accrue more PR capital from their adherence to the Fairtrade mark as Sainsbury’s is increasingly seen as being as bullishly self-serving as Tesco or Asda.

Meanwhile those who never bought into the idea that Fairtrade and supermarkets are natural bedfellows will continue to buy authentic Fairtrade products from their rightful home: indie wholefood shops.