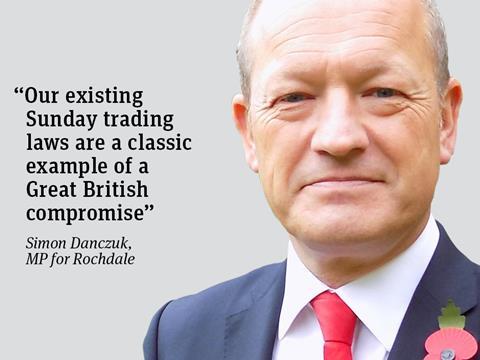 Now he has been forced to shelve his plans to extend Sunday trading, George Osborne needs to realise the economic argument for longer opening hours is well past its sell-by date.

By my count, the government has tried and failed to push through legislation on relaxing Sunday trading laws three times since 2010. Staff, customers and small shopkeepers alike will now be hoping the Chancellor will finally abandon the idea.

Giving councils the power to permit longer Sunday opening would create many losers and very few winners. Figures from the Keep Sunday Special campaign show that two thirds of council chief executives believe longer opening hours in neighbouring areas would have a negative impact on local trade. Forced into direct competition over deregulation, local authorities would waste no time in waving through 24-hour Sunday opening for supermarkets.

The lack of uniformity in Sunday trading laws would result in a convoluted patchwork of different rules, creating an unfair disparity for workers and wreaking havoc for any national chain trying to establish a coherent country-wide trading strategy.

Supermarket staff would be coerced into working longer hours with, as the SNP pointed out, a real risk wages would be pushed down. Small shop owners too would need to open longer to compete.

With a mandatory living wage coming in and meaningful business rate reform still a long way off, the Chancellor’s u-turn is a rare bit of good news for shopkeepers in my constituency of Rochdale. One corner shop owner told me of his relief. “It used to be the one day we got to ourselves to have a rest and see our families,” he said. “I don’t know many other jobs where people work so many hours 365 days a year.”

The days of a completely shuttered-up Sunday are a thing of the past, but there is no valid argument for turning what should be a special day into just another shopping opportunity.

The idea that longer Sunday hours is the key to a major economic boom is nothing more than a myth. Simply opening for longer on a Sunday does not magically create more customers or greater demand. It spreads shopping across seven days rather than six-and-a-half and diverts customers from community-based shops to the soulless out-of-town mega-markets.

Those in favour will cite the brief period during the 2012 Olympics during which restrictions were lifted. But the experiment was more of a false start than a medal winner as c-stores lost an estimated £26m in sales to their larger rivals.

If the Chancellor is intent on ignoring the figures, then perhaps he will listen to his heart and the testimony of supermarket staff. Three-quarters of shop workers already say they are unhappy with their work-life balance. Sunday is often the only day families get to spend together.

Relaxing Sunday trading laws would inflict misery on thousands of hardworking people. Perhaps Mr Osborne should take a quiet Sunday at home to reflect on that.

Simon Danczuk is MP for Rochdale