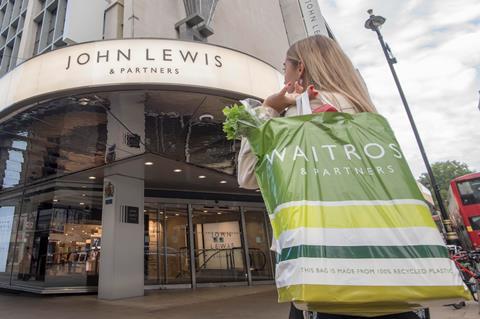 The trial was introduced to showcase its focus on connecting the businesses as part of its ‘& Partners’ rebrand.

John Lewis Partnership has signed up over half of those customers invited to join its joint John Lewis and Waitrose loyalty scheme.

Some 300,000 shoppers asked to use the combined card have agreed to do so, with JLP calling their feedback so far “encouraging”.

It introduced the scheme combining the benefits of its MyWaitrose and My John Lewis loyalty cards in September in a bid to showcase its focus on connecting the two businesses as part of its ‘& Partners’ rebrand.

The benefits available to Waitrose loyalty scheme members include its Just For You offers, complimentary hot drink after shopping in a store, Health and Food magazines, and 10% off at its cookery school. My John Lewis customers get early access to its clearance sales and complimentary cake at its in-store cafés.

“We have been really encouraged by the response to the card,” a JLP spokesman told The Grocer. “The feedback from customers involved is that they have welcomed having the convenience of a single card, and we are continuing to test and learn with them.”

The spokesman added JLP had not yet set an end date for the trial.