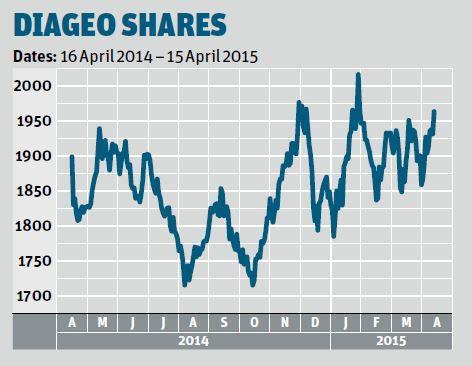 There were contrasting fortunes for the UK’s largest listed alcohol firms on Thursday as Diageo’s share tumbled on an unexpected earnings drop, while SABMiller was buoyant as the brewer beat fourth-quarter expectations.

Diageo fell almost 3% to 1,910p on Thursday after a surprise 0.7% drop in organic third-quarter sales, as the brewer missed analyst expectations in every region. North America sales edged up 0.9% while Europe was down 1.3%, but the big problem was a collapse of trading momentum in emerging markets. Though African sales were up 8.2%, sales were down 6% in its vital Asia-Pacific market, and down 10.2% in Latin America.

“‘If it’s not hurting it’s not working’ is the line from Diageo, reflecting their resolve to target sell-out volumes against the temptation to stuff the channel to deliver the quarter,” said analysts at Jefferies. The broker added “Diageo remains as unloved as we can remember” but retained its buy recommendation on “management’s determination to stamp out the sins of the past”.

Conversely, Peroni brewer SABMiller was up 1.8% in morning trading on Thursday to 3,649p after posting a higher-than-expected 4% rise in beverage volumes in the fourth quarter. Nevertheless, Shore Capital downgraded the brewer from buy to hold in the run-up to the figures, arguing: “Following another year of relative outperformance, we anticipate a more in-line performance from the likes of SABMiller as investors gradually move back to being ‘risk-on’ as global markets start to see economic recovery.”

Elsewhere, WH Smith continued its trend of falling sales and rising profits as it grows its travel business and squeezes savings out of its remaining high street estate. Group total sales slipped to £611m in the six months to 28 February, compared with £613m a year earlier, with like-for-like sales down 2%. However, pre-tax profits jumped 4% to £72m. Conlumino’s George Scott commented: “WH Smith’s shrewd focus on sustainable cost management is compelling while it is being proactive in trialling new concepts on the high street.”