Greggs has come a long way since Pastygate. Trading improved significantly in the second half of last year, and this week the baker was one of the biggest risers on the FTSE thanks to strong half-year results.

On Wednesday, Greggs shares leapt 4.1% to 520.5p after the chain reported a 48% jump in underlying profits to £16.9m for the half year to 28 June. The improvement was driven by a turnaround in sales performance - like-for-like sales rose 3.2% in the first half against a half-year decline of 2.9% a year ago. Greggs shares have recovered strongly - gaining a third from a low of 392.1p a year ago. Its shares are fast approaching the high of more than 550p they hit on the eve of Pastygate in 2012, when the threat of VAT on pasties and sausage rolls sent shares plummeting.

“Greggs is engaged in a period of focus and self-improvement under CEO Roger Whiteside that has beaten our expectations and impressed us,” said Shore Capital analyst Clive Black. Under Whiteside, Greggs has closed underperforming stores, revamped others and invested more in coffee and low-calorie sandwiches.

Reckitt Benckiser was another strong riser this week. It gained 2.7% to 5205p after reporting better than expected half-year results on Monday. Operating profit rose 16% to £1.06bn in the six months to 30 June. “We read the first half as an earnings and margin beat and a strong result in the core, with continued good delivery out of the mature Europe North America region the stand-out for us,” said Jefferies analyst Martin Deboo. 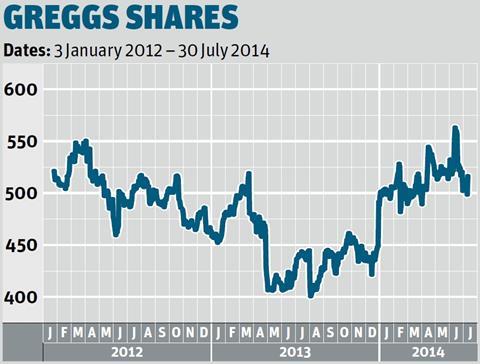