Monster is the most 'socially active' soft drink brand

Making a splash on Facebook is easy. At least it is if you’re a brand with a big budget and a target audience consisting mostly of young men. The formula seems to be simple: regular video footage of extreme sports, fast cars and scantily clad women.

At least this is the strategy of Monster Energy, Britain’s most ‘socially active’ soft drinks brand, according to content marketing agency Headstream, which has compiled a ranking of how effective Britain’s biggest soft drinks brands sought to foster support on Facebook throughout February.

Monster climbed to the top of the ranking partly because its Facebook page has a global reach and is not targeted purely at a UK audience, as brands further down the list such as Relentless and Shloer are, says Headstream account executive Victoria Bellamy.

“They’re posting the sort of thing people are interested in watching: extreme sports; motorbikes; surfing; the sort of thing they are not exposed to every day,” she says. “It strikes me as quite masculine, especially with the Monster Girls.”

Along with frequent posts relating to extreme sports, a regular feature on the page is Monster Girl Monday, usually accompanied by a video featuring a bevy of bikini-clad women gyrating in a swimming pool or at a motorsports event, leaving neither little to the imagination nor any doubt over the target audience.

“I’d say they’re going for men in their late 20s or early 30s but the nature of social media means there’s a risk it will be seen by younger people,” says Bellamy. “The extreme sports stand out as an aspirational lifestyle they’re promoting, in conjunction with the idea that Monster gives you energy to do these things.”

Red Bull was the next most successful. Again, the brand benefitted from a global reach and regular posts relating to extreme sports. The most significant differences between the top two brands are the bigger budget sports on Red Bull’s page (such as footage from the brand’s sponsored motorsports and aviation events across the world) and a distinct lack of female flesh.

This suggests the brand is going for a more universal appeal than Monster’s more masculine approach. “Red Bull does seem to have a much bigger budget,” says Bellamy, pointing to footage from Red Bull’s motocross events, downhill ice skating and F1. “The most memorable thing they’ve ever done is the Felix Baumgartner space jump. It’s stuff that’s not necessarily associated with the energy drink but people want to watch and share. They are really pushing the boundaries.”

This is crucial, following changes to Facebook’s financial model. While brands can have a Facebook page for free, their posts will only reach about 1% of their audience if they do not pay a fee to have them promoted on followers’ homepages. One way to increase reach is to release must-see content followers want to share, says Bellamy, although it’s unlikely posts will reach the optimum audience without financial backing. “When Facebook started you could freely use Facebook as a promotional tool,” she adds. “Now, if you want to be seen you have to pay.”

Pepsi, for example, is no stranger to social media even if it eschews Facebook. “We’ve activated Pepsi Max very strongly across the digital platform,” says Paul Graham, MD of Britvic, Pepsi’s UK bottler and distributor. “We have the biggest YouTube channel of any UK fmcg brand and our content is consistent with Max’s ‘maximum taste, no sugar’ proposition’.”

Again, Pepsi’s online content bears similarities to Monster’s and Red Bull’s, with a focus on sports such as street football and stunts performed by anyone from basketball stars to magician Dynamo. One of the brand’s most viewed videos in the past year is the Unbelievable Bus Stop prank, in which a London bus shelter was fitted with an augmented reality screen showing footage showing footage of alien invasions and meteor strikes (see below). The film has received nearly 7 million views.

YouTube, says Bellamy, has an obvious advantage. “Brands can use YouTube for free,” she says. “If you’re posting something out for free, every engagement is a positive. I wouldn’t say Facebook is no longer relevant. People are still using it every day. A millennial audience will look at a Facebook page before they look at the TV.” 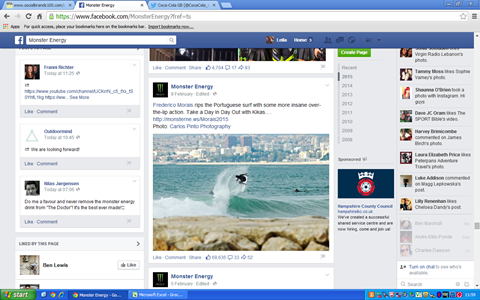 What young man wouldn’t want to be Frederico ‘Kikas’ Morais? This post, featuring a link to a video of one of the world’s best surfers (he prevailed over global surfing superstar Kelly Slater in the 2014 world championships) slicing through and spinning above the waves of his native Portugal, is clearly designed to inspire Monster drinkers.

It seems to have done just that: the post received nearly 70k likes during our sample period. “It’s also worth acknowledging that Monster is a global brand,” adds Bellamy. “It serves a global community; posts are not necessarily geo-targeted for UK only and therefore potentially have a much wider reach, unlike some of the other smaller brands which are more UK specific. 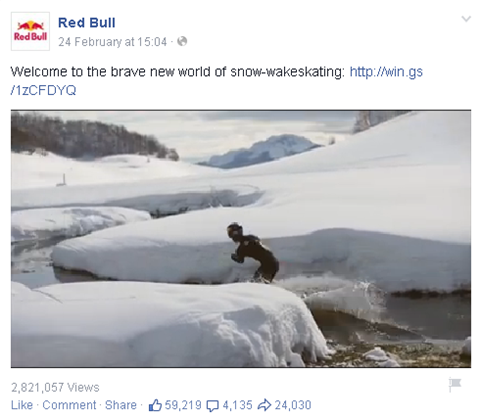 There probably doesn’t sound like there’s much in the way of subtlety about a publicity stunt involving a man strapped to a length of fibreglass being dragged at speed through a frozen wilderness. But subtle this is: Red Bull takes a backseat in this compelling footage of professional wakeskater Brian Grubb mixing wake and snowboarding, with the drink’s branding only appearing on the jumps Grubb launches himself off with the aid of a high powered winch.

Of course, this is crucial for any brand that wants its content to go viral. Posts need to have genuine appeal for a target audience and the fine balance between interesting content and overt branding needs to struck. “This post received by far the largest number of shares, which is a key indicator of engaging content,” says Bellamy. “This content is likely to be of particular interest to extreme sports fans given that this could be the first time some of the community have come across this sport.” 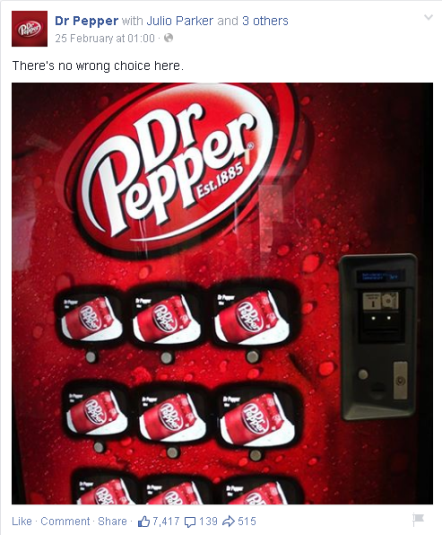 The next three posts in the top five make it clear that, of course, extreme sports aren’t the only way to get followers buzzing on Facebook. You can always cast a wide net by paying for your posts to appear on as many newsfeeds as possible. That Dr Pepper’s posts don’t have quite the same level of excitement of Red Bull or Monster’s (they’re mainly product shots and the odd picture of a dog) suggests the brand has been helping to fill Facebook’s coffers.

“It’s likely that the posts have been promoted, given the size and prominence of the brand, but the content is enjoyed by the community and many are even prompted to share the post,” says Bellamy. “The Dr Pepper global Facebook community is more than 15 million strong and therefore their posts have the potential for great reach.”

4. Lucozade Energy: Who’s got a crush this Valentine’s Day? 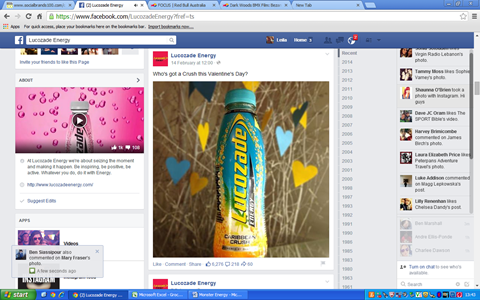 “Topical and timely posts are an effective way for brands to stay relevant on social platforms,” says Bellamy. “This image from Lucozade was posted on Valentine’s Day and the copy makes a clever reference back to the ‘crush’ flavour featured in the product shot.”

Given Lucozde Energy’s relatively small following on Facebook (the brand’s page has just under 600k likes, compared to Red Bull’s almost 43 million) the level of engagement for this post was relatively high. Rather than aligning itself to extreme sports, the brand regularly posts product shots and giveaway competitions.

5. Shloer: Say it with Shloer 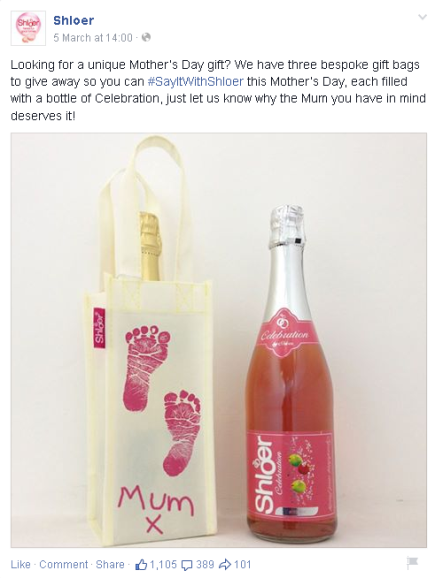 There’s another way to get noticed on Facebook: give away free stuff. That’s what Shloer did in this Mother’s Day promotion, in which the brand asked its followers to come up with reasons why their mums deserved to win one of three gift bags, a canny way of encouraging interaction online. This post has an impressive number of comments, given Shloer’s relatively small following of 57k.

“Once again, the timely nature of the post drives up relevance, and the community responds well to the prize incentive,” says Bellamy. The winners included Lynsey A M Miller, who said her mum “is always there for me and my boys… and is always putting everyone before herself”. Ahhh…

Social and content marketing agency Headstream partnered with The Grocer to compile this study. The Grocer provided Headstream with an original source list of the 15 socially active soft drink brands to be considered. An active Facebook presence was then found for 14 of the brands, and their social performance was monitored for a one month period dating from 6th February to 6th March 2015 inclusively. Where no active UK page was found, analysis reverted to the global page with posts available for UK audience. Within this time frame we extracted each of the Facebook brand posts that were published on the relevant brand pages. The brands that we analyzed were: Coca-Cola, Pepsi, Fanta, Irn-Bru, Dr Pepper, Schweppes, Sprite, and 7up, Tango, Shloer, Lucozade, Red Bull, Monster, Relentless and Euroshopper. For the purpose of this report, an engagement is considered to be a like, comment or share over Facebook. We awarded one point for a like, two for a comment, and three for a share – based on their value to the brand. These figures were then totaled to form the combined score shown in the below ranking.