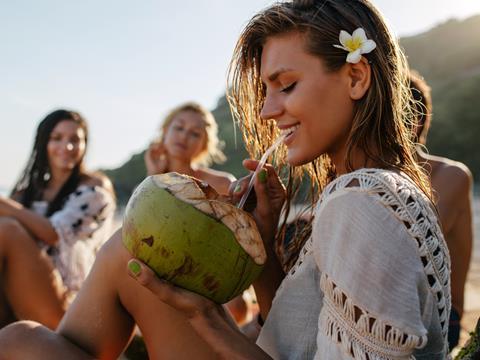 An explosive FSA investigation into the coconut water sector has found added sugar in 60% of samples – despite the drinks being labelled as pure and free from additives.

The National Food Crime Unit intercepted consignments of coconut water imported to the UK via the Port of Felixstowe earlier this year and analysed 12 samples. Of those, seven tested positive for sugar from external sources, such as sugar derived from starch, sugar cane or maize.

Added sugar was found in samples of Chi, Foco, Go Coco, Tropical Sun, Suncrest, Yaco and Pearl Royal. In total, nearly 400 tonnes of coconut water were seized or removed from the market, though the FSA stressed none of the products posed a risk to public health.

Read in full: The Grocer’s 2016 investigation into coconut water

An FSA spokeswoman said all brand owners and importers had been cooperative and taken any necessary remedial action. Major retailers had also been informed of the findings and encouraged to “take responsibility for verifying their supply chains and ensuring consumers can be confident that they are purchasing authentic, correctly marketed coconut water”.

The revelations come after an investigation by The Grocer in August 2016 uncovered growing concerns about standards in the coconut water sector, with undeclared sugar – often added to balance out variations in natural sugar levels – a particular problem. 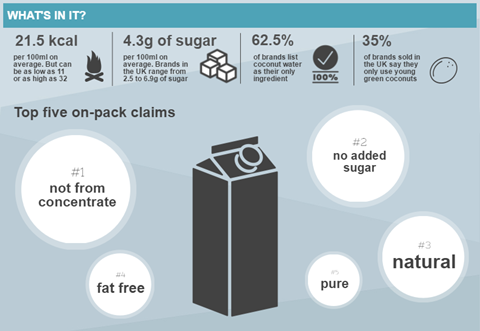 Chi said it became aware of potential adulteration issues in some Asian factories in late 2016 and subsequently found one of the factories it used had been supplied adulterated coconut water by an external “cracking facility”. It said it had immediately quarantined the SKU in question, destroyed all product and put the factory on notice. “We take the matter extremely seriously and have, since then, put in many checks to ensure our standards are met before product leaves Asia,” added founder Jonathan Newman.

A spokesman for Tropical Sun also said the company was aware of “wider industry issues” and therefore had a strict testing regime in place. He pointed out the batch that tested positive for added sugar had done so at the port, and Tropical Sun’s own testing would have caught the issue before any product would have made it to sale. “We have not sold a single drop of tainted coconut water,” he added.

Go Coco said current UK testing protocols to establish the presence of added sugar were inaccurate and “cannot be determined to be conclusive”. Despite this, it had changed its raw material suppliers and stepped up its testing regime to prevent any future issues.

Sales of coconut water have grown rapidly in recent years, hitting more than £100m in the UK last year. Research by The Grocer suggests there are now more than 40 different brands available to British shoppers.

The FSA spokeswoman said NFCU investigators had decided to look into coconut water because of “the increased sales of coconut water products, high price points, and the fact that consumers would find it hard to verify product quality”.

Newman at Chi said he believed rapid growth had put huge pressure on raw material supply and supply chains. ”I believe the issue, in part, seems to stem from factories trying to maintain artificially low prices due to the heavy demand placed on them and price wars in the supermarkets,” he said.

The NFCU probe, dubbed Operation Snowdrop, ran between 1 December 2016 and 31 March 2017 and formed part of Operation Opson, a joint Europol-Interpol initiative to tackle substandard and counterfeit food and drink. 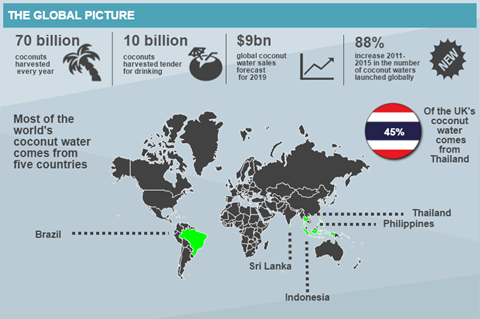 Jonathan Newman, founder of Chi, said: ”We first became aware of the potential for certain Asian factories to adulterate some coconut water products back towards the end of 2016. Since that time we immediately tested all of our product and found one factory was being supplied adulterated coconut water by an external ‘cracking facility’. We immediately quarantined the SKU in question (being only one of our 14 lines) and since destroyed all product in question. We put the factory on notice and we also notified other factories as to the seriousness of the issue. We take the matter extremely seriously and have, since then, put in many checks in place including regular testing of product to ensure our standards are met before product leaves Asia. It should be pointed out that our Raw Coconut Water in PET bottles, which uses HPP to extend shelf life, was not one of the effected SKUs.

”As a brand owner, and not the owner of a factory or production equipment, we rely on our 3rd party co-packers to deliver to us what we are ordering and paying for, so it is disappointing that certain Asian factories break this trust. I believe the issue, in part, seems to stem from factories trying to maintain artificially low prices due to the heavy demand placed on them and price wars in the supermarkets.”

Ross Currie, MD of Freedom Brands (owner of Go Coco) said: ”It is true that the FSA did some random testing on one of our production batches produced in early 2016 which found that this batch did not meet their criteria and that there was a possibility that exogenous sugar was present in our product. This conclusion could not be proven 100% and was the opinion of the lab technician after comparing their results to a database of raw material which had been previously tested. This batch never entered the UK market and was disposed of at port.

“Despite the issue over certainty we took the results very seriously and carried out an investigation which resulted in us quickly changing our raw material suppliers in Thailand as a precaution. We then carried out further testing on all of our following productions at our Thai factory and all tests were found clear and we have passed every production since without any issues. We have also stepped up our testing regime frequency and increased the level of testing accuracy at our factory which will prevent any further issues.

”We would like to make it clear that the current testing protocols within the UK to establish the presence of exogenous sugar is inaccurate and cannot be determined to be conclusive which resulted in a real challenge for us as a brand. We now consider the matter resolved.”

Tropical Sun said: 1) The batch that tested positive for added sugar did so at the port. This batch was returned to our supplier and did not make it to sale. 2) Even if the Suffolk Coastal Port Health Authority had not tested the batch (via Public Scientific Analysis Services Ltd), we would have tested it, having been aware of the wider industry issue, and would have uncovered the problem. The batch would not have made it to sale – i.e. our product testing policies would have been more than sufficient to detect the issue. 3) We have not sold a single drop of tainted coconut water.

The Grocer has approached the other brands named by the FSA, and will update this section with their comments