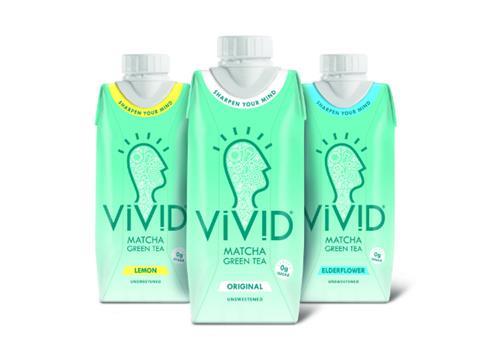 Matcha brand Vivid is axing its sweetened drinks-to-go and replacing them with an unsweetened range.

Rolling out from today (6 June), the new, three-strong line-up of sugar-free green tea drinks comprises Original, Lemon and Elderflower (rsp: £1.89). Each 330ml pack – made with matcha, a high-caffeine ‘superfood for the mind’ – features Jamie Oliver’s proposed sugar-per-teaspoon labelling and is marked zero.

They are less than than five calories per serving, and will be available in Waitrose, Whole Foods Market, Holland & Barrett, Planet Organic and Selfridges.

The new ranges replaces the sweetened Grape, Elderflower & Lime, Ginger & Honey and Pear & Rhubarb flavours, which are still listed in retailers but will be no longer available once stocks run dry.

The move to axe them comes ahead of the sugar tax and was planned long before the levy was announced, claimed Vivid founder James Shillcock.

“We are committed to delivering a product with unrivalled positive effects on cognitive performance, and that means no sugar,” he said, adding that the “science is clear” on how sugar “impedes brain function over time”.