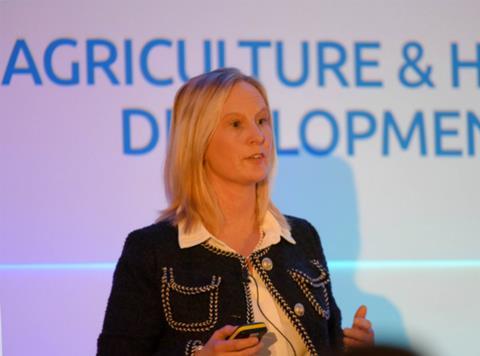 In January, AHDB announced plans to restructure its exports, trade and consumer marketing teams to give it a “more agile and streamlined approach to consumer marketing campaigns, enhanced relationships with retailers and an export team ready to seize post-Brexit opportunities to open new markets.”

With the changes coming into effect this month, AHDB chief marketing and communications officer Christine Watts spoke to The Grocer exclusively about what the new ‘fit for future’ AHDB looks like, and how it will be supporting UK agriculture in the year ahead.

Why did AHDB decide to restructure?

As part of our work looking at what will happen to the industry post-Brexit we’ve been sending out a lot of messaging around being fit for the future to farmers, growers and processors, encouraging them to take a look at their business and do some risk planning and strategic thinking.

We felt that, as the levy body, we needed to do the same because you can’t talk the talk and not walk the walk. So we reviewed the work we were doing, looking at what our focus was, where we were having an impact, what skills, talents and resources we had on our existing team and where we ought to be investing more.

That was the driver for the restructure, not least because our consumer insight told us the products consumers are interested in and the way you communicate with them is very different to five or six years ago.

Right, so what changes have you made?

As we announced in January, we have restructured our marketing and export teams after going through a consultation process with members of those teams, and we’ve put in a new structure effective from April 2018.

We have invested in a number of areas, specifically in our creative and digital team. We know that many of our target audiences, especially millennials, are changing the way they are consuming information and looking to things like Instagram, which is very different to how it was in the past.

We’ve also taken a look at our international export teams with a focus on where we are trying promote and gain market access, working with other partners including QMS, HCC and Defra under the Food is Great brand.

We’ve built a new regional basis for those teams, so we have a dedicated team for Europe, Middle East and Africa, to be headed up by Remi Fourrier, and a team that is going to look at Asia Pacific including China, headed up by Jonathan Eckley.

That will give us the opportunity to get in-market expertise so we can help grow those markets we already have access in, and gain new market access agreements where we don’t currently have access.

We are also upskilling our trade team so we’ll have a new retail and foodservice engagement team headed up by Matt Southam. He will be working with our retailers and foodservice partners looking at how we can share best practice.

There has been speculation the restructure means AHDB will offer fewer resources and less emphasis on the meat sector. Is that true?

No. It’s interesting there is an accusation out there that we will be spending less on marketing. Contrary to speculation, our planned expenditure in this year will be greater than in the previous year.

For example, in Beef and Lamb once our last year’s (17/18) accounts are finalised we will see an actual spend of c£9.4m. This financial year (18/19) we have a budget figure of some £2m more at £11.4m. The sector board has agreed that the money be invested in marketing campaign activity, ensuring meat products are prominent and relevant. AHDB is also investing in valuable export market development by, for example, focusing on access for British beef in China.

We have always had a sector-specific view, and that won’t change. We still have sector boards who set the strategy and define how the budget is allocated. What we are saying is, what is the most efficient and effective way we can spend the money for farmers, growers and processors so they get the maximum value.

So where it makes sense to share resource or talent or research/insight we will do that to get best value for money for levy payers. But where we need dedicated expertise or campaigns that are dedicated and specific, that is absolutely what we will still do.

Will there be any redundancies as a result of the restructure?

Unfortunately, there has and will be some redundancies. But it is likely there will be less than 10. While we have got redundancies, that is balanced by new roles where we have invested in certain areas, such as our international events team.

What marketing activity have you got planned for the year ahead?

We will be building on some significant UK domestic consumer marketing campaigns. We will continue working with Dairy UK on Department for Dairy Related Scrumptious Affairs, which is a nice tongue-in-cheek campaign giving consumers a reason to like, love and consume dairy. We’ve already reached over 17m people through social media, 2.6m through web adverts, and 8.7m via billboard advertising with that campaign.

We will be delivering a new marketing campaign targeting beef thin-cut steaks, which has the tagline ‘If you have the passion we have the sizzle’ and is aimed at getting consumers to really think about beef and thin-cut steaks as a quick, easy and versatile midweek meal ingredient.

We are also involved in a €10m (£8.7m) promotional campaign for European lamb with Britain, France, Ireland and Germany, which is focusing on improving the image of lamb meat and encouraging its consumption.

And the second phase of our pork campaign is set to run in the autumn, targeting pork medallions, fillet and loin steaks at the midweek meal consumer. According to initial Kantar data, during the first phase of the campaign, which ran from 1 September 2017 to 5 November 2017, pork sales were up 8% on the same period in 2016.