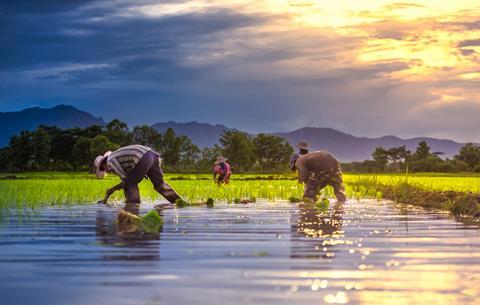 Importers want a say on government proposals to reduce tariffs on some food sourced from overseas, which they say would help reduce inflation but could at the same time diminish the government’s leverage in free trade negotiations.

Speaking after prime minister Boris Johnson suggested the government would ditch some tariffs on imported food, Fresh Produce Consortium CEO Nigel Jenney said cutting the import barriers “would have a positive impact, from an industry point of view and a consumer point of view”. Importers of fruit and vegetables would also “welcome engagement with government about this”, he added.

Jason Bull, director of Eurostar Commodities, which imports food into the UK from inside and outside the EU, suggested cutting tariffs “would help to soften inflation, if importers passed on the saving”.

Rice supplier Bull said “we are struggling in Europe with drought and potentially very poor harvests and this would help get the supply in that we need to satisfy demand from further afield without trade barriers such as tariffs”.

Yacine Amor, founder of the London-based Artisan Olive Oil Company – which sources from Spain, Italy and Tunisia – said cutting tariffs “would be a sensible move and a step in the right direction to help alleviate inflationary pressures”.

Any cuts would apply to food that cannot be grown or produced domestically, according to Boris Johnson, who said “food tariffs we don’t need” should be removed.

Johnson told reporters at a Nato summit in Madrid that food had been discussed at the just-concluded G7 meeting, which saw, according to the PM, “a new impetus to cut food tariffs, $750bn worth of food tariffs around the world.”

Johnson’s comments echoed remarks he made in early June, when he questioned the UK’s need for tariffs on items such as bananas and Turkish olive oil.

The impetus for freeing up food trade has come in the wake of surging food and consumer price inflation, which earlier this year hit four-decade highs in the UK, US and across Europe. Food commodity prices and costs such as fuel and fertiliser had been climbing since mid-2020, with prices spiking again in the wake of Russia’s invasion of Ukraine in February.

The Department for International Trade has been drawing up a list of possible cuts, though trade secretary Anne-Marie Trevelyan warned in April that removing tariffs on food would affect “a tiny, tiny proportion on the cost of living”.

Which food commodity prices are still rising and how high can they go?

Amor said if the government was to effectively target food inflation, “a more impactful decision” than cutting tariffs “would be an enquiry into logistics and transport companies which are feeding double-digit inflation into the economy whilst posting record profits”.

Trevelyan had previously suggested tariffs would best be targeted during free trade deal negotiations, while food importers have acknowledged their removal could undermine the UK’s negotiating position ahead of future deals.

“As we do negotiations with particular countries, those are areas where for beneficial trade improvement we would consider removing tariffs in the same way as we would ask them to reduce tariffs”, she told the parliamentary trade committee in April.

The UK has agreed free trade deals with Australia and New Zealand, both major food exporters, since the implementation of the post-Brexit agreement with the EU, source of half of Britain’s food imports.

The government recently put back until next year the scheduled imposition of physical checks on EU-sourced food, citing the potential impact on inflation, though the postponement was criticised by some in the food and transport industries who had spent heavily on preparations for the start of controls.

It has started free trade talks with Canada and India, also major food producers. Much of India’s output is for its enormous domestic market, though it was last year by far the world’s biggest rice exporting nation.

Bull, who imports rice from Italy, Thailand and Vietnam, said any food tariff cuts “may help overall costs and availability” if they can be implemented quickly,

But he acknowledged removing tariffs posed other dilemmas for the government, including potentially reducing its leverage during free trade negotiations.

“Take rice for instance – if they cut tariffs all together it would render new FTAs worthless but would open the playing field to new origins,” Bull said.

The FPC’s Jenney, who recently called on the government to cut the red tape faced by British food importers, said any tariff cuts could see the government losing out on “substantial” revenue.

But at the same time, cutting tariffs would in turn reduce costs elsewhere, he said, citing the “extra paperwork and bureaucracy” incurred by tariffs, which “then amount to a further cost, for both business and government”.

US renews demands for increased access to UK food market