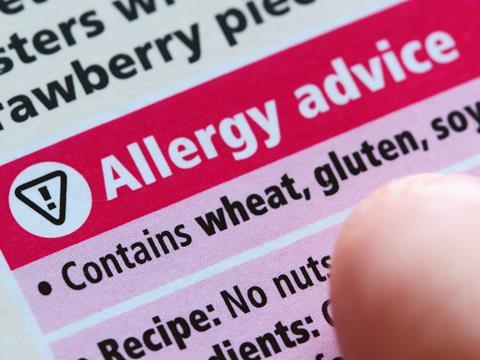 Allergen labelling could be at risk

Food labelling could run out ‘within weeks’ because raw ingredients are being diverted into hand sanitisers, packaging manufacturers have warned.

Hand sanitiser and inks for food labelling rely on the same supplies of ethanol, but the surge in demand for sanitiser has consequently left a shortfall elsewhere.

Many manufacturers report they have two weeks of supplies in stock but are concerned that replacement orders may not arrive.

“Within weeks it could be we’ve got a real problem if those supplies can’t be replenished,” said Bowtell.

“I don’t know if there’s an emergency option where you remove all branding from products and they just come in plain packs… At the moment we haven’t got that far but it’s a possibility where we might end up.”

Although there is no suggestion that supplies should be diverted away from hand sanitiser for vital health services, “there will have to be a choice between where the alcohol goes,” said Dick Searle, CEO of The Packaging Federation.

Defra is reportedly considering relaxing labelling laws following discussions with the Food & Drink Federation (FDF), but is said to be concerned that comprehensive derogations on food labelling could result in some manufacturers not following the rules.

Any changes would therefore have to be both necessary and appropriate with no introduction of additional risk to customers, sources claim.

A government spokeswoman said it has ”well-established ways of working with the food industry to ensure it is prepared and retailers are taking all the necessary steps to ensure consumers have the food and supplies they need.”

FDF confirmed it has asked Defra to consider flexibility with non-safety related labelling rules, although recognised that “alternate sourcing may be necessary on a temporary basis to maintain production,” said an FDF spokeswoman.

Some argue alternate sources could include ethanol from the biofuel industry. All petrol is currently required to contain up to 5% of ethanol under UK regulation.

“That’s only done for environmental reasons,” said Tom Bowtell. “They could temporarily pull that to allow more ethanol to be used in hand sanitisers, which would allow more of the alcohols we need to come into the food packaging supply chain.”

Packaging issues are indicative of broader secondary effects beginning to affect the food supply, according to Andrew Kuyk, director of the Provision Trade Federation.

“These secondary effects are things that make supply and distribution more difficult,” he said.

“They’re not going to stop it, but they are going to make life more complicated at a time when we’re all hoping it can be a bit less complicated.”