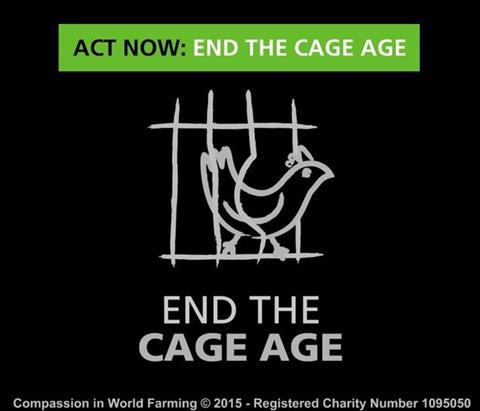 Egg producers have hit out at a new Compassion in World Farming campaign to ban the use of all cages in egg production.

CIWF wants an extension of the European ban on barren battery hen cages introduced in 2012, to the larger, less densely populated enriched cages that replaced them.

Almost 60% of Europe’s 500 million hens still spent their lives being farmed in cages, said CIWF. Its campaign includes an undercover video exposing welfare conditions at chicken farms across Europe, and it is also planning to lobby European lawmakers on the matter.

“The industry heralds these cages as making vast improvements on battery cages but when you see the way these cages still leave hens crammed in, with barely any space to stretch their wings and the minimal enrichment that is legally required, it’s clear that for the hens a cage is still a cage,” said CIWF director of campaigns Dil Peeling.

“The ‘enrichment’ in these cages is little more than window dressing,” he added.

Producers described CIWF as “hypocritical” given it had previously encouraged the introduction of enriched cages. “We as a company, and the industry as a whole have invested millions to rebuild our cage infrastructure, and I am proud of the improvements we have made on animal welfare,” said Chris Kirkwood, owner of egg producer and packer K Fresh, which supplies eggs to Aldi and Booker.

“We were the second company in the country to introduce enriched colonies, and did so before the EU law on banning battery cages was ratified,” he added.

“I’ve invited all the welfare groups here to see how they work, including CIWF, so why they are now embarking on this campaign?” he asked. “CIWF should direct its energies at countries which still use battery cages”.

Another major egg supplier questioned “the need to introduce new legislation” banning enriched cages given the industry’s recent upheaval. He argued with an increase in availability of free-range and barn eggs “consumers would decide” on the future direction of the sector rather than groups like CIWF.

In response, Peeling said “you can’t provide good welfare through confinement”, adding the CIWF would “keep campaigning to get rid of all cages” from food production.

A spokesman for the British Egg industry Council said legislation banning battery cages had been “implemented in full”. He added: “We are operating enriched colony cages and we believe that it has made a big difference to bird welfare.”