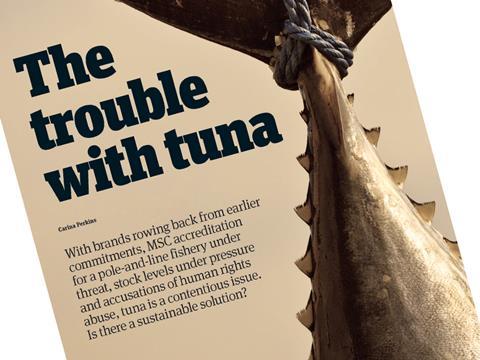 We all, in the industry, read with interest ‘The Trouble With Tuna’ (30 January, p36) in The Grocer earlier this year. The tuna industry does have challenges and nowhere is this more evident than the Indian Ocean.

There is relatively healthy skipjack stock in the Indian Ocean and it is widely agreed by stakeholders that action needs to be taken to ensure it stays this way. Unfortunately the Indian Ocean’s yellowfin stock is not as healthy and urgent action is required to rebuild the population to a healthy level.

Tuna is critical to economies, communities, and cultures throughout the Indian Ocean and can continue to provide jobs, food, and development opportunities for generations to come.

The official body tasked with managing the Indian Ocean’s hugely important tuna resource is the Indian Ocean Tuna Commission (IOTC), which comprises 32 member countries involved in fisheries in the region. They meet later this month and we’re calling on them to modernise their approach to fisheries management to stop tuna populations falling dangerously low. It is essential that strict, science-based harvest control rules are implemented in the region’s fisheries alongside action plans to quickly deal with any situations where stocks breach clearly defined reference points. While the process of developing these management procedures can be difficult, the IOTC has a real opportunity at the meeting to show its commitment to sustainability.

These calls from the International Pole & Line Foundation (IPNLF) to the IOTC have the support of its growing membership, among them M&S. We’re working with M&S on new studies that will provide essential science-based evidence to these fisheries and the IOTC on tuna stock levels. M&S is funding the work and the IPNLF will carry out the research, focusing on establishing robust data on the yellowfin catch in the Maldives. We’re confident this knowledge will be central to making decisions that help rebuild yellowfin stocks.

It’s clear to all that fisheries in the area need help and it is essential that we see much more stakeholder engagement in the future; be it direct research funding or working with organisations like the IOTC.

Most countries catching yellowfin are doing so with very basic technology. It is unrealistic to ask them to cut their catches. The recent expansion of dFAD fishing only benefits industrial fisheries in offshore areas and a significant decrease in the number of dFADs would help reverse the decline of yellowfin. The IOTC could also look at placing tough restrictions on or banning the use of so-called ‘support’ or ‘supply’ vessels, which are used to improve catch rates around FADs, often leading to increased catch levels of juvenile yellowfin. Such a measure was adopted in the Eastern Pacific in 1999 and has proven to be effective.

Over a quarter of the world’s tuna originates in the Indian Ocean. Action must be taken now to ensure stocks are responsibly managed.