Our food environment needs protecting from the dead zone 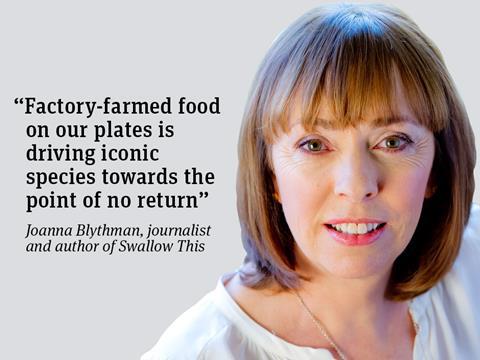 You might think all the arguments against factory farming have been thoroughly aired, but a whole new concern has been flagged up with the publication of Philip Lymbery’s new book Dead Zone: Where the Wild Things Were.

We think that threats to magnificent species such as the elephant and jaguar come from poachers; the trade in body parts for traditional Chinese medicine, ivory, and the like. But with eyewitness testimony and evidence from his travels, Lymbery argues that factory-farmed food is also driving these and other species towards the point of no return.

Take the jaguar. Its population is declining because its natural habitat is being deforested to clear space for farming land. The jaguar, though threatened, isn’t yet in as much trouble as the Sumatran elephant. There are only 2,500 of them left because their habitat is being flattened by the never-ending spread of palm plantations, a crop that turns up in multiple forms in both processed food and toiletries. African penguins go hungry because unsustainable catches of small fish (herrings, sand eels, anchovies) further down the marine food chain are being swallowed up by an insatiable fishmeal industry.

Our self-destruct industrial system makes animals and people compete for food. Where land was once left wild, or grazed, converting things humans can’t eat, like grass, into meat, milk, and eggs, now it is turned over to crop production to feed livestock.

Worldwide, the number of mammals, birds, reptiles, amphibians, and fish has halved in the past 40 years, driven by food production. A forest half the size of the UK is cleared every year for farmland.

Closer to home, precious native species - nightingales, barn owls, peregrine falcons - are being affected by barren monocultures. We rely on bees to pollinate crops, yet a tunnel vision fixation on maximising yields from single crops doused in chemicals is killing them off, along with much other life.

We share our natural environment with a world of other species and the wellbeing of homo sapiens is predicated on a thriving, living landscape. When it comes to survival, people and wildlife are in it together.