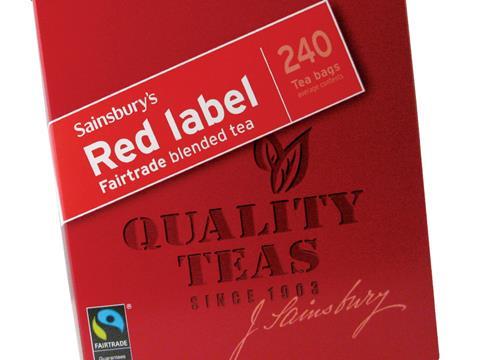 Sainsbury’s has rejected criticism from Fairtrade over the supermarket’s new Fairly Traded sustainability standard, and suggested the NGO’s concerns were motivated by “self-interest”.

Sainsbury’s Sustainability Standards, which launched this week, would change the way it sources key crops and ingredients, and help build better relationships, the retailer claimed.

The new standards will start with a pilot from June on key own-label tea lines, which will see Sainsbury’s extra strong, green, red and gold label tea ranges drop Fairtrade certification and use a new Fairly Traded logo underpinned by new standards from June. Sainsbury’s said it would also provide tea farmers with a guaranteed minimum price for their crop along with a social premium and the added opportunity “to build long-term relationships with Sainsbury’s, and receive tailored strategic advice, data and practical support to help them respond to their specific challenges”.

The plan is to roll out the new standard across a host of categories including bananas, coffee and prawns.

However the move has thrown the retailer’s ongoing relationship with the Fairtrade Foundation into doubt after the NGO declined to work with Sainsbury’s on the trial, citing “fundamental concerns” it would not meet the NGO’s principles and would leave growers “disempowered”.

Fairtrade CEO Michael Gidney warned 229,000 farmers would be affected and said the initiative would not deliver “positive changes for tea farmers”.

Fairtrade Africa tea producers, who said they were “extremely concerned about the power and control Sainsbury’s seeks to exert over us”, echoed his comments in an open letter to the supermarket on Wednesday (24 May).

When approached by The Grocer, Sainsbury’s dismissed the criticism out of hand and insisted farmers would not lose out. “Growers will benefit and our customers will benefit on the basis of a secure and sustainable supply chain,” said a Sainsbury’s spokesman.

“Given we will be taking the Fairtrade logo off packs of tea - which we have to pay a fee to Fairtrade for - there is only one organisation that is losing out from this move,” he added. “The initiative will be protecting the people it was set up to support, which is the growers.”

The launch of Sainsbury’s Sustainability Standards will also see the retailer create a new advisory board, which will oversee work on sustainable sourcing and help develop support projects, called the Sainsbury’s Foundation programmes. The board will be run by Sainsbury’s, but will also include independent specialists from charities, academics and NGOs.

“Ethical and sustainable sourcing are at the heart of our business and as the world changes we cannot stand still,” said Sainsbury’s CEO Mike Coupe. “That’s why this innovative pilot will build on our existing work and relationships and we’re aiming to deliver significant benefits for our farmers, our businesses and our customers.”