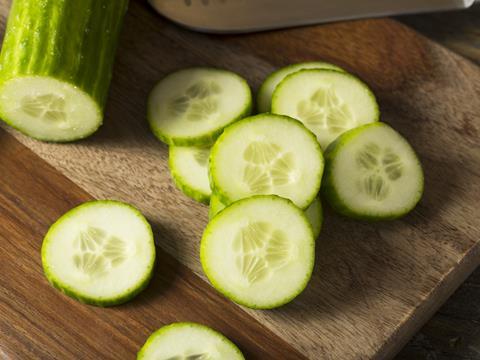 The impact of Britain’s salad shortage is due to continue until at least October, with cucumbers the latest produce to take a hit, growers have warned.

Consumers used Twitter last week to complain of a lack of cucumbers available on shelves in the mults. It comes as a shortage of produce available in the Netherlands - the UK’s main supplier during summer - doubled prices on the wholesale market from £4 to £8 for a box of 12, said Lea Valley Growers Association secretary Lee Stiles.

British cucumbers were spared the ill effects of the heatwave that destroyed leafy salads in the field as they are grown in glasshouses, enabling them to benefit from the warm weather, said Stiles.

“But even during the British season, we’re only about 30% self-sufficient in cucumbers, leaving supply at the mercy of availability in the Netherlands,” he added.

Growers in the Netherlands started to run out of usable produce, having been hampered by extreme hot weather, leaving importers scrambling to secure supplies from Spain, said Dan Byrd, sales manager at importer Ferryfast Produce.

“Spain has also seen its problems with very dry, hot weather, leaving little early season produce on the market, while the rest of the crop is due to come into season in October,” he told The Grocer.

“This year we’ve seen increased demand for asparagus due to shorter seasons in the UK and other parts of Europe, as a result of a shorter spring and a much warmer summer,” said IAG Cargo regional commercial manager for Latin America, Rodrigo Casal.

It comes as the British Leafy Salads Association warned the late season rain throughout August had failed to resurrect the UK’s lettuce crop.

“The last crops of the season were planted in tricky conditions when the mercury was around the 30-degree mark,” said a BLSA spokesman.

“The crop coming to maturity now is still quite small and there are still some imports coming into the UK. There won’t be a return to business as usual until the start of the Spanish season in October. That will, as always, depend on the weather in Spain.”