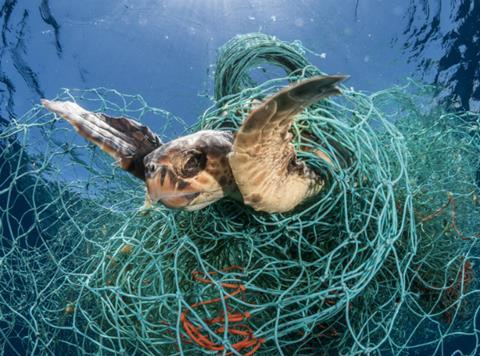 The world’s 15 largest seafood companies need to step up their efforts to stop lost fishing nets from killing millions of fish and other marine animals a year, a new report by World Animal Protection has urged.

At least 640,000 tonnes of abandoned, lost or discarded fishing gear - otherwise known as ‘ghost gear’ - was added to oceans every year, said the NGO in its new report, titled Ghosts Beneath the Waves, published today (8 March).

Calling for urgent action from the seafood industry, the WAP report revealed that just three out of the world’s 15 biggest seafood companies had achieved “improver” tier three status for tackling the ghost gear issue, with John West owner Thai Union, TriMarine and Young’s Seafood given credit for having an established policy to reduce ghost gear. However, they still had more work to do, WAP warned.

A further two companies: Bumble Bee Foods and Dongwon (StarKist) achieved tier four status - which recognised the issue was on their agenda but with “limited evidence of implementation”.

However, no companies achieved tier one or two status for being a leader, which set examples of best practice, or being companies that saw the issue as integral to their business strategy.

The remaining 10 companies, which included Beaver Street Fisheries, Clearwater Seafoods, Cooke Seafood, East Coast Seafood Group, High Liner Foods, Maruha Nichiro, Nissui, Pacific Seafood Group, Pescanova and Samherji, all sat at the bottom of the rankings with tier five status, which states companies had “not engaged” and shown no evidence the issue was even on their agenda.

WAP said ghost gear was a “catastrophe for marine life as we know it” with some 45% of all marine mammals on the international Red List of Threatened Species having been affected by lost or abandoned fishing gear.

With the topic of plastic waste and marine litter high on the government agenda following the success of Sir David Attenborough’s Blue Planet series last autumn, WAP CEO Steve McIvor said he hoped the report would spur seafood companies on to engage with the issue.

“We hope to see the companies at the bottom of the ranking working hard to improve and rise in the ranking in future years,” he added. “These companies must remember that consumers demonstrate they care about the welfare of animals when they are deciding what brands to put in the shopping baskets.”

Joining the Global Ghost Gear Initiative, of which only Young’s and TriMarine were currently members, was “an important first step they can take”, he added.

“Fishing gear is designed to catch and kill, and when it is left in the ocean it is the most harmful form of marine debris for animals.

“It’s heart-breaking to know that animals caught in this incredibly durable gear can suffer from debilitating wounds or suffocate or starve to death over a number of months.”