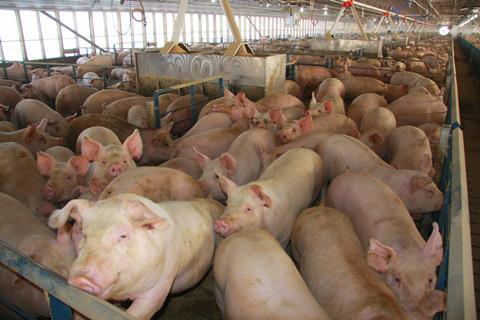 The origin of soy fed to pigs is particularly murky, according to the report

Almost 90% of pork in UK supermarkets could be fuelling deforestation due to a lack of transparency in soy supply chains, a new report has concluded.

The findings are based on an analysis of soy in retailers’ livestock supply chains, produced by sustainability advisors 3Keel and sponsored by all the major UK supermarkets.

The report said that though supermarket policies had boosted the volumes of soy certified as deforestation-free by 15% in the past year, supply chains were still overwhelming opaque, with the majority of soy unable to be traced back to its country of origin.

Like Brazilian beef, soy is heavily linked to deforestation. A fifth of all soy exported from Brazil to the EU comes from deforested land in the Amazon and Cerrado regions, according to a study published in Science last month.

The UK’s annual demand for soy equates to an area about the size of Wales, according to a recent report by the WWF and RSPB, with roughly 65% of this located in Brazil, Argentina and Paraguay, all high-risk countries for deforestation.

Soy used in pork is particularly murky as most producers purchase animal feed with soy already mixed in. They are therefore unable to declare their product as deforestation-free “because the information that would back this up may just not be available to them,” said Will Schreiber, partner at 3Keel and the report’s author.

“A lot of pork is also imported into the UK and so there’s less control over what the feed is,” he added.

Poultry and eggs saw significant improvements in their use of certified deforestation-free soy on 2018, with almost 40% now certified. This is largely due to producers buying soy directly from traders and mixing their own feed. Poultry was the first soy target of some retailers due to it consuming more than any other sector.

Supermarkets’ policies had driven much of the improvement in the adoption of more responsible sourcing practices, said Schreiber, but further change was needed among suppliers.

“With pork, dairy and beef, there needs to be more of a sector commitment as opposed to individual supply chains,” said Schreiber. “It needs to be something bigger to drive that change.”

Lizzie Wilson, policy services officer at the National Pig Association, said: “The pig industry does present greater challenges in comparison to other sectors.” It was working to develop greater traceability and increase its proportion of certified soya, she added.

Wilson noted that converting to 100% sustainable soy was a slow process. “Economic and political instability in countries such as Argentina and Brazil from where some UK soya is sourced also means progress is difficult. We must be cognisant that moving too quickly may result in the UK losing our ability to influence positive and tangible benefits on the ground.”

With environmental destruction spiking under the tenure of Brazilian president Jair Bolsonaro, companies are under mounting pressure to address deforestation in their supply chains.

Nestlé stopped buying Brazilian soy from Cargill last year due to its concerns over traceability of its soy, while Tesco, Sainsbury’s and Asda were among 87 major companies to write to Bolsonaro in December urging his government to stop further deforestation of the Amazon for soy production.