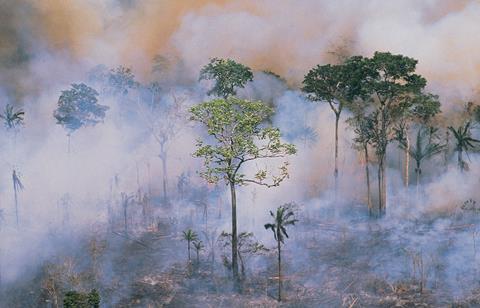 British supermarkets have threatened to boycott Brazilian products if the national congress passes a bill to increase the speed of deforestation in the Amazon rainforest.

Nearly 40 food companies have signed an open letter calling on Brazil’s legislature to reject a bill which would allow farmers legal rights over land occupied without authorisation.

Conservation groups have warned the new law will legitimise illegal land grabs and pave the way for more forests to be burned for agriculture such as beef and soy.

The same group of companies – including Tesco, Morrisons, Sainsbury’s, Asda, Aldi, Lidl, M&S, Co-op and Waitrose – made a similar threat last year but withdrew it after the Brazilian government removed the bill.

Moy Park and Pilgrim’s UK – both owned by Brazilian meat giant JBS – are also signatories. Activists have pressured supermarkets to drop JBS as a supplier after numerous alleged links to Amazonian destruction.

The letter said it is “extremely concerning to see that the same measure we responded to last year is being put forward again… with potentially even greater threats to the Amazon than before”.

It added that while “our door remains open to work with Brazilian partners”, if existing protections were undermined, “we will have no choice but to reconsider our support and use of the Brazilian agricultural commodity supply chain”.

Amazonian deforestation has soared under Brazilian president Jair Bolsonaro and hit a 12-year high in 2020. However just two weeks ago, Bolsonaro promised to strengthen environmental protections and reaffirmed a commitment to end illegal deforestation by 2030 following pressure from the US. The letter said the latest measures are “counter to the narrative and rhetoric” previously agreed.

A vote on the bill is expected this week.