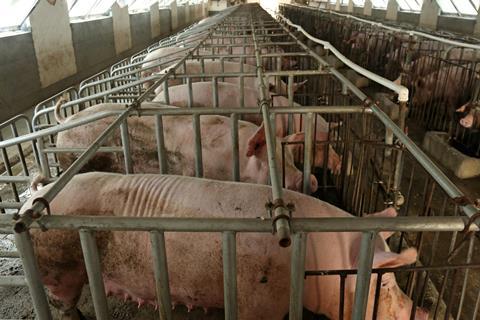 Tesco has pledged to look into eradicating sow stalls in the pork supply chain of its Thai subsidiary after coming under fire from welfare group World Animal Protection.

The NGO has launched a campaign targeting Tesco CEO Dave Lewis over Tesco Lotus’s sourcing practices. It said it sold pork produced on “barbaric” farms where pigs were confined to steel cages and “used as breeding machines”.

The practice of keeping pigs in sow stalls was banned in the UK in 1999. WAP said it had already had success persuading Thai producer CP Foods to commit to eradicating cages by 2025.

In response, a Tesco spokesman said the retailer took care to “uphold high standards for animal welfare right across our supply chains”, and stressed it continuously reviewed its standards according to the latest scientific advice.

“All the pork meat sourced by our Thai business is certified by the Thai government which sets standards for animal welfare in that country,” Tesco said. “We are currently working with our suppliers in the region to explore how we can exceed these standards by moving sows out of stalls and into group housing.”