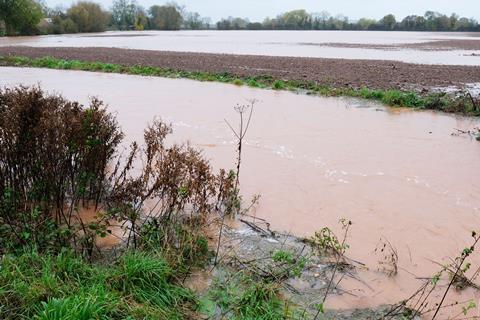 Growers were xpecting a ’severe delay in drilling and sowing winter cereals’, said the NFU

Wheat prices look set to rise after the cumulative effects of the recent wet weather left the UK with its lowest growing area for the crop “since the late 1970s”, according to the NFU.

With farms across the UK assessing the impact Storm Dennis had on already sodden ground this week, the union warned its members were expecting a “severe delay in drilling and sowing winter cereals”.

Farmers in most areas of the UK had been unable to access their land since the autumn to plant this year’s crops, with many instead turning to spring crops, such as barley.

However, a growth in barley crops could flood an already oversupplied market, an NFU spokesman warned. “Which is concerning enough in more normal times - but given our reliance on the EU market for our surplus grain there is an added complexity in 2020,” he added.

The picture for other crops appears equally challenging, with farmers increasingly concerned about the 2020 growing season.

“People should be putting in crops for the summer, but there isn’t much sign that’s going to happen anytime soon,” said British Growers Association CEO Jack Ward. “Last year, we started drilling peas on 28 February. At the moment, people haven’t even got the tractor out of the shed. You can’t see fields in some places as they’re still underwater.”

Ward added the weather was likely to cause shortages of UK-grown brassicas in the coming weeks, with spring greens also likely to take a hit.

Onion producers are also viewing the next few weeks with some concern.

“Up until first week of April is not too bad [for planting]. We don’t need to panic quite yet but I think the wet weather will have some impact,” said chairman of British Onions, Tim Elcombe.

“Who knows, it could come warm and dry next week, and we could all be cracking on in a couple of weeks’ time but everywhere I go seems so saturated.”

However, there is some good news, with growers in eastern East Anglia avoiding the worst of the weather and getting what will be the first crop of onions into the ground, according to Elcombe.

There does not appear to be much prospect of the wet weather abating, meanwhile, with the Met Office forecasting further wet weather in most areas of the UK over the coming days.