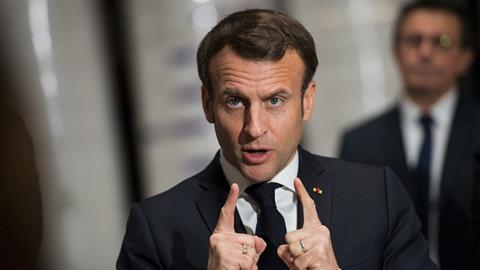 The story of food during the coronavirus outbreak is chequered with self-fulfilling prophecies.

The UK wasn’t actually at risk of running out of pasta, for example, until fears among shoppers resulted in panic buying and empty shelves. One only needed to believe others were hoarding in order to rationally do the same.

In recent weeks, governments around the world have started displaying the same behaviour, imposing export bans to hoard food staples despite no signs of a global shortage.

Since the beginning of the Covid-19 outbreak, Kazakhstan has banned exports of wheat flour, Russia has put a cap on grain shipments, and Vietnam has stopped issuing rice export contracts.

Closer to home, France is encouraging supermarkets to reduce imports in a move seen by some as a potential shift away from international trade.

Such export bans and protectionism are clearly a threat to global supply chains: but could the UK’s food security be at risk?

Similarly, it only takes one country to start banning food exports to create a ripple effect that prompts other countries to make similar moves.

Covid-19’s threat to food supplies is causing some countries to get jittery, triggering painful memories of 2007-08 when export bans led to a global food shortage and price spikes.

But a key difference today is that there are currently no widespread shortages of food.

“On paper there shouldn’t be an issue,” says Joseph Glauber, senior research fellow at the International Food Policy Research Institute and former chief economist at the US Department of Agriculture. “You just hope other countries don’t react.”

So far, most haven’t. While more than 70 countries have imposed bans on exports of medical supplies, trade restrictions on food remain limited. Some suggest that’s because where countries are imposing food export bans, it’s not purely down to the pandemic.

“There seems to be lots of localised circumstances rather than a global trend,” says Simon Evenett, professor of economics at the University of St Gallen in Switzerland.

Russia’s curb on wheat exports, for example, was due to a fall in the rouble against the dollar that made it more attractive for farmers to ship abroad than sell domestically.

Another encouraging sign for global food supplies is that some export restrictions are seemingly being relaxed.

Vietnam’s trade ministry has reportedly advised the prime minister that the ban should be curtailed in favour of quotas, while Egypt has exempted some legumes from its previously comprehensive ban.

“Export curbs are less of a worry,” says Evenett. The greater threat to UK food security, he believes, could come from the situation emerging in France.

Last month, French President Emmanuel Macron issued a rallying cry to the nation’s supermarkets to buy more local produce. “Delegating our food supply… to others is madness. We have to take back control,” he said, according to France24.

Whether supermarkets will heed the call is unclear but, for some, it is a sign the EU’s single market on agricultural goods is under threat.

“Why Macron felt that in the middle of a global pandemic, you suddenly announce that we should be sourcing more of our food from home is really a bizarre move”

“It is most definitely a soft form of protectionism and it is reprehensible,” says Evenett. “Why Macron felt that in the middle of a global pandemic, which is a medical issue, you suddenly announce that we should be sourcing more of our food from home is really a bizarre move.”

France is a significant exporter of foods such as wheat, fruits and dairy to the UK, all of which could be hit if the country follows through.

“A ban on imports often amounts to a ban on exports,” says Evenett, who argues if France diverts more domestic production to the local market, there will naturally be less available to export.

And while the UK wouldn’t necessarily feel an immediate impact, issues could mount if other countries followed suit.

“If France does it then other countries will be tempted to follow,” warns Evenett.

The likes of Spain and Italy, two of Europe’s biggest fruit and vegetable producers, could be among those tempted to follow France’s lead if their production levels fall due to a lack of seasonal workers.

Such a move would raise urgent questions for British retailers as to where they source much of their food from.

“If we’re not able to get the fruit and vegetables we normally get from Italy, Spain or France, where will our food come from?” asks Tim Benton, research director in emerging risks at Chatham House.

“We can’t always rely on the global south, particularly as it’s going into winter and less of the production will be coming from there anyway.”

The UK’s continued position within the EU customs union could offer some security against potential export restrictions, says Emily Rees, MD at Trade Strategies, as she believes outright internal trade barriers from Spain or Italy are unlikely.

But as long as the UK is in the customs union, it must keep an eye on tariffs, she warns.

“If we’re not able to get the fruit and vegetables we normally get from Italy, Spain or France, where will our food come from?”

The EU often increases tariffs to protect European farmers from cheap imports during the harvest season. If Brussels chooses to do so again this year, coupled with potential shortfalls in European production, the UK could be left scrapping around to find affordable fresh produce.

Rees is confident the UK will always find sufficient food, but choice might be compromised. Tropical fruit, for example, could suddenly become more popular due to its low tariffs.

“You might find changes in the types of fruit and veg that are made available to people,” says Rees. “There may be less Spanish strawberries but more Brazilian mangoes.”

The prospect of Brazilian mangoes may not sound too bad, but plenty more twists in the tale could lie ahead. As Simon Evenett warns: “This really isn’t over yet.”