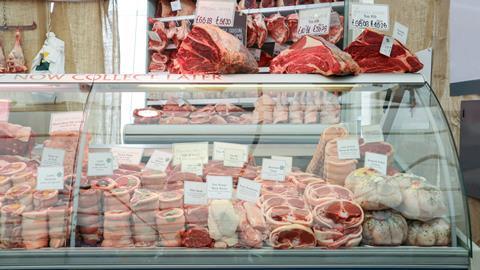 You might imagine that would be bad news for the meat sector, but as it celebrated the start of National Butchers’ Week yesterday, there was also clear evidence that the pandemic-driven resurgence in the popularity of meat – particularly through local butcher shops – will continue to soar.

It’s a far cry from the start of the first lockdown almost a year ago, when a meat sector counting the cost of veganism’s rise in popularity suddenly faced the added challenge of a rush for mince from panic-buying shoppers.

The subsequent fall in demand for higher-value cuts threatened the sector’s delicate carcase balance and the future viability of the entire supply chain.

Fast-forward a year later though, and Kantar sales for Hybu Cig Cymru/Meat Promotion Wales for the 12 weeks to the start of February shows that locked-down Brits are now looking beyond beef mince to create more “at-home restaurant experiences” with premium red meat cuts.

In contrast, the sales of cheaper cuts failed to keep pace, as beef mince only managed a 13% increase in volume over the same period, less than half the 37% increase seen in the 12 weeks to the start of May 2020.

Much of this change in buying habits can be attributed to the heavy promotions undertaken by the mults from last April onwards, in a bid to tackle the growing carcase balance crisis.

And this resurgence has also filtered down to the butchers’ shop sector.

Research undertaken last spring for National Butchers’ Week (which is organised by The Grocer’s publisher William Reed) shows that 88% of surveyed butchers’ shops saw an increase in turnover during the first lockdown, with just over half seeing turnover increase by between 21% and 80%.

And consumers, it seems, increasingly see a regular visit to their local butcher as a key part of their shopping routine.

A nationwide survey of 2,000 meat eaters by HCC and Kantar revealed 33% of shoppers were now prepared to spend more money on higher-quality cuts than before the pandemic.

Over a fifth of shoppers (22%) said they would prioritise heading to the local butcher to purchase meat, with 51% saying the main reason was the quality of produce, with 38% wanting to support local businesses.

“People are looking for different things, and butchers’ shops are able to educate shoppers and better match what they want,” says Paul Turner, owner of Hampshire-based butcher shop Alf Turner.

“We had to adapt and lost a massive amount of business at the start of the pandemic, but we then saw unbelievable customer volumes,” he adds – with trade multiplying six-fold at the height of the first lockdown and up by a double over the course of the past 12 months.

It’s a similar tale for a host of other butchers taking part in National Butchers’ Week, many of which also pivoted to include delivery and click & collect services – all while working in the most challenging conditions in living memory.

“The butchery industry has adapted and innovated to the needs of a nation and shone a light on the importance of local businesses,” says National Butchers’ Week sponsor Stuart Revill of butchers’ twine supplier Henry Winning & Co.

“Butchery right now is important to the nation, everyone is recognising the quality and great customer service butchers have to offer, so this is the perfect time to promote all that is good in the trade,” adds Glen Kirton of fellow sponsor Windsor Food Machinery.

After such a difficult year for the food sector, here’s hoping shoppers will continue to recognise that quality over the next 12 months.