Steven Gerrard back with Lucozade for Fuel to Rule campaign 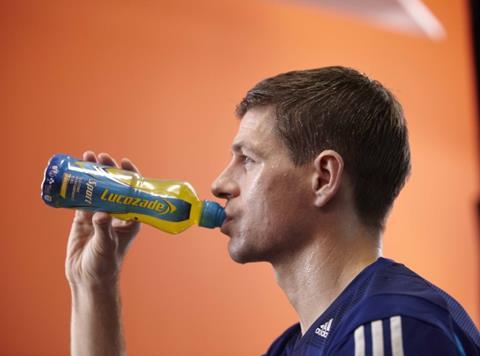 The TV ad for Fuel to Rule, which kicks off in Ireland today (1 March) followed by the UK in mid-April, shows the Liverpool and England midfielder training with other sportspeople who are ‘fuelled and hydrated’ by Lucozade Sport. It has the strapline ‘Enhances Hydration, Fuels Performance’.

The Lucozade Ribena Suntory brand said it was looking forward to welcoming Gerrard back following a four-year break.

“No one represents determination quite like him so he was a perfect fit, particularly with the hydration challenges the Brazilian heat will throw at Gerrard this summer,” said brand development director David Stratton.

The push follows Lucozade Sport’s recent return to growth. Sales have risen 6.6% [Nielsen 52 w/e 1 January 2014] since last year’s controversial ad campaign, which was banned by the ASA following a complaint from bottled water lobby group The Natural Hydration Council. The £9m push, by former owner GSK, used the slogan ‘hydrates and fuels you better than water’.