The LED evolution: Colourful story of the light-emitting diode

Nobel Prizes for physics don’t get handed out to just anyone. Previous winners include Marie Curie, Albert Einstein and, last year, François Englert and Peter W Higgs, of Higgs Boson fame, for their work with the Large Hadron Collider, which is expected to reveal answers to questions about the universe that have puzzled scientists for hundreds of years.

That puts this year’s winning scientists - Isamu Akasaki and Hiroshi Amano, from Nagoya University, Japan, and Shuji Nakamura, of UC Santa Barbara - and their work on the relatively humble LED in hallowed ­company. Yet it also emphasises how important some of the world’s deepest thinkers consider LED to be to the future of the planet.

“Incandescent light bulbs lit the 20th century; the 21st century will be lit by LED lamps”

The three scientists developed the first blue LED light in 1993. It was the missing link - a feat that had defeated scientists for more than 30 years. Red and green (and yellow) LEDs had been in commercial use since the 1960s. But without blue, there could be no white light. So when the trio beamed the elusive blue light from their semi-conductors, they transformed lighting technology forever. Bright white LED light was now possible.

“In the spirit of Alfred Nobel, the Prize rewards an invention of greatest benefit to mankind,” said the Royal Swedish Academy of Sciences. “The invention of the efficient blue LED is just 20 years old, but it has created white light in an entirely new manner and to the benefit of us all. With the advent of LED lamps we now have more long-lasting and more efficient alternatives to older light sources.”

Succeeding where “everyone else had failed,” the citation continued, “their inventions were revolutionary. Incandescent lightbulbs lit the 20th century; the 21st century will be lit by LED lamps.” 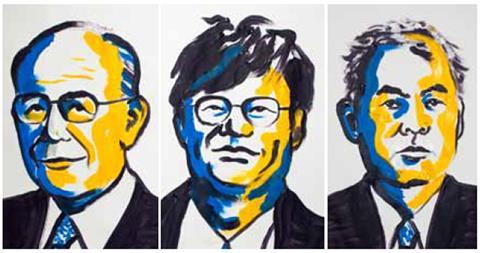 From left: Isamu Akasaki, Hiroshi Amano and Shuji Nakamura built on more than a century of work with LED before making the breakthrough in 1993 that had foiled scientists for 30 years - the creation of blue LED light that made white LED light possible for the first time. Their reward was a Nobel Prize and an even share of eight million SEK (about £228k each)

Praise indeed, both for the three scientists and for the future of LED. And Nobel also compiled some facts and figures to underline exactly why they awarded the prize to the trio, and the importance they place on LED as a future technology.

“White LED lamps emit a bright white light, are ­long-lasting and energy-efficient,” they continued. “LEDs are constantly improved, getting more efficient with higher luminous flux per unit electrical input power. As about one-fourth of world electricity ­consumption is used for lighting purposes, LEDs will contribute to saving the Earth’s resources.”

Not only that, but the Nobel committee added that LED holds “great promise” for increasing the quality of life for more than 1.5 billion people around the world who lack access to electricity grids, as due to lower power requirements it can be powered by cheap local solar power.

Those low-power requirements belie LED’s reputation for being astonishingly bright. Indeed, before the Vatican installed LED lighting in the Sistine Chapel last month they sent in a team of lighting designers, restorers and colorimetry experts to make sure the new system wouldn’t alter the colours of Michelangelo’s Renaissance masterpiece, which only finished a ­controversial, but startling, restoration in 1999.

In fact, they concluded, the gentler LED lights would reduce the ageing of the painting compared with the old 1980s halogen system.

Designed and installed by LED specialists Osram, the new £2.4m lighting set-up, which was part-funded by the EU (while Osram gave its services for free), ­features more than 7,000 LED bulbs that use up to 90% less electricity than the halogen system it replaced.

According to Osram, the chapel’s electrical power consumption has plummeted from 66 kilowatts to just 7.5 kilowatts. Yet the lights themselves are capable of shining 10 times brighter than the bulbs they replaced and, according to visitors to the chapel, have generated new depth in the paintings themselves, giving the nudes an almost 3D appearance.

They also say the tones feel richer, after a total of 280 ­colours used on the walls, ceiling and The Last Judgement were spectrum-analysed to match the ­variety of colours used in the LED bulbs.

“Art exists to inspire us and illuminate our minds,” said European Commission vice president Neelie Kroes at the grand switch-on. “Now that we have illuminated the Sistine Chapel with LED, Michelangelo’s art can fulfil this role even more than it has up until now throughout history.

“LED offers convenience, clarity, and flexibility. It offers less damage to artworks. Not to mention an energy saving of up to around 60% to 70%. And they are ­taking off. A relative newcomer, today they account for just over one euro in seven spent on lighting; within five or six years, that could be over one euro in two.” 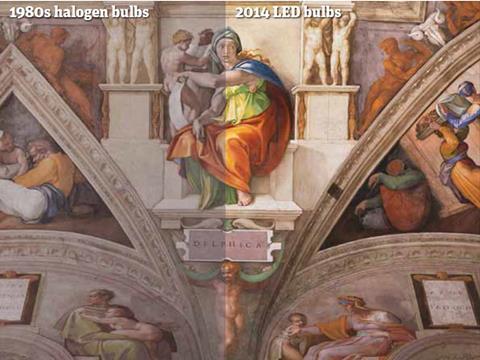 In 1999, the Vatican completed a controversial restoration of the Sistine Chapel. But this before and after picture, supplied by the Vatican isn’t of the restoration. It shows the difference since the paintings, which cover a total of 12,000 sq ft, after the were lit by LED as opposed to halogen bulbs. The reception to the new lights has been enthusiastic, not least because the colour spectrum of the bulbs was specifically designed to enhance the colours used in the paintings. And the chapel’s energy consumption has fallen from 66 kilowatts to just 7.5 kilowatts, cutting the Vatican’s lighting bill by 60%. (Copyright: Governatorato dello Stato Citta del Vaticano - Direzione dei Musei)

The Grocer’s Switch the Lights campaign plans to help make that acceleration happen across UK retail. However, although the brightness of LEDs might be achieving the impossible in Rome by making the Sistine Chapel even more beautiful than it already was, when the potential of LED was first realised, way back in 1907, brightness was a weakness rather than a strength of LED.

LED was invented by an English electronics engineer, Henry Joseph Round, who ­discovered that inorganic materials could light up when an electric current was applied to them. He published his discovery in a magazine called Electrical World, but was distracted by his other experiments and his work with lighting fell by the wayside.

Over the next 30 years, Russian physicist Oleg Losev and French physicist Georges Destriau made further headway with the nascent technology. However, it is Losev who has been credited with the discovery of elementary LED.

A radio technician and passionate physicist - despite having no formal scientific education - Losev noticed that diodes used in radio receivers emitted light when electrical current passed through them. He investigated further and eventually created what today’s ­scientists generally accept was the first semiconductor diode capable of emitting light - the first-ever LED - in 1927.

Losev published his initial discovery in a snappily titled paper called ‘Luminous Carborundum Detector and Detection Effect and Oscillations with Crystals’. Further papers followed. At one point he used Albert Einstein’s quantum theory to explain the way LEDs produced light without also producing heat, and he reportedly wrote to Einstein asking for help to develop his LED theories. However, he received no reply. And sadly, Losev’s primitive but pioneering work with LED was cut short when, aged just 39 and along with a million other Russians, he starved to death in 1942 during Hitler’s siege of Leningrad.

It wasn’t until 1962 that the next major development took place in the evolution of LED, when a flurry of activity saw the invention of a red (or ruby) LED.

Four research groups in the US - Robert Hall and Nick Holonyak from different departments of General Electric Company laboratories, Marshall Nathan of IBM, and Robert Rediker of MIT - simultaneously claimed credit, although Holonyak was given the nod by his peers and subsequently dubbed the “father of the light-emitting diode”. And although Round, Destriau and especially Losev can be credited with much of the groundwork that built up to Holonyak’s discovery, this moment unquestionably marks the birth of the ­mass-produced LED.

As the 1970s arrived, red LEDs found their way into consumer products like early digital watches (before being replaced by less power-hungry LCD displays) and green, orange and yellow LEDs (the yellow ones were invented by M George Craford, a student of Holonyak) followed soon after.

Performance and effectiveness continued to improve throughout the 1980s but it wasn’t until 1993, when the Nobel Prize-winning trio made their blue LED breakthrough, that the next big development in LED took place and white LED lights were born.

Not that their breakthrough heralded the charge of LED lighting into grocery retailing (see box, right). In fact, it wasn’t until more than a decade later, in 2004, that Tesco started exploring the potential of LED, while over in the US, LED lighting started to appear inside freezers as part of a trial by US giant Walmart, at a store in South Euclid, Ohio.

Progress ever since has been steady, but slow. Now, The Grocer, backed by some of the biggest retailers , industry bodies, energy ­companies and environmentally-friendly organisations in the UK, is calling for another major development - for UK retailers to switch their lights to LED.

Doing so could save the average grocery store up to 50% on their lighting bills, according to what the Carbon Trust says is a “conservative” estimate. And though upfront cost can be a sticking point for some, there are options available to claim back the investment against tax, or effectively eliminate upfront cost ­altogether in the form of Energy Performance Contracts, where a retailer pays an agreed monthly charge pegged at less than the predicted saving on energy bills. And at the end of the contract, the retailer is sold the equipment for a nominal £1 and keeps enjoying the benefits for years to come.

There are also all manner of ecological advantages alongside the must-have financial benefits for everyone involved. And ultimately, if LED lighting is good enough to win a Nobel Prize, as well as illuminate one of the most magnificent masterpieces ever created, what more recommendation does anyone need to Switch the Lights?