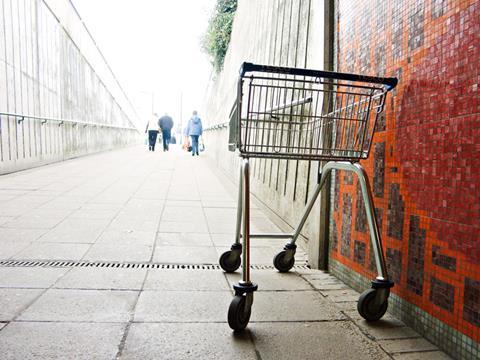 A staggering 1.5 million trolleys are abandoned every year, a report to be published today (Saturday) will claim.

The Local Government Association, which represents more than 370 councils in England and Wales, said the trolleys were “blighting” the nation’s streets and waterways.

With many ending up in rivers and canals, councils are being forced to stem floods and remove blockages in a “massive clear-up operation” costing millions per year, the report adds.

The LGA claimed Wychavon Council had collected 30 trolleys from watercourses, estimated to have cost the taxpayer in the region of £3,000.

With some supermarkets recently scrapping £1 trolley deposit schemes, the LGA report warned supermarkets the problem was getting worse. And some councils fear extra thefts will occur because of the new charge on plastic bags.

The LGA report called on supermarkets to work with councils to combat trolley thieves with beefed-up bollards and security gates; increased use of CCTV in store premises; awareness campaigns; and more wheel locking devices.

Local authorities can apply to the government to charge supermarkets for the recovery of the trolleys. But the LGA said it was a time-consuming and bureaucratic process.

It called for the system to be streamlined. “Supermarkets need to slam the brakes on trolley thefts because the country is becoming blighted with abandoned carts,” said Cllr Peter Box, the LGA’s environment spokesman.

Tom Ironside, BRC director of business and regulation, said: “Retailers spend millions on loss prevention each year including the theft of shopping trolleys. And most stores make considerable effort to collect trolleys when members of the public let them know where they are.”