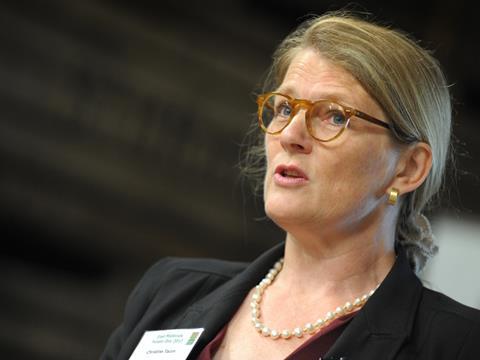 Groceries Code Adjudicator Christine Tacon is launching a new probe into three of her “top five” issues, amid concerns supermarkets are continuing to breach the rules on delay in payments, forecasting and promotions.

Tacon has released a new survey calling on suppliers to come forward with evidence, after telling The Grocer complaints had “stubbornly refused to come down” in her annual survey released in June.

The new survey is asking for information on cases of retailers overbuying at promotional price from suppliers and subsequently selling at full price. It also asks for examples of cases of supermarkets expecting suppliers to predominantly fund promotions.

The survey quizzes suppliers for cases where they have been given no compensation or incurred penalty charges as a result of inaccurate forecasting by a retailer.

Tacon’s third issue involves delay in payments, including deductions relating to drop and drive disputes, for alleged short deliveries and deductions for “unknown or unagreed items”.

In March, The Grocer revealed Tacon had received new evidence of retailers allegedly breaching the Code on forecasting and promotions.

Even if the retailer has the right to vary unilaterally under a supply agreement, it must give “reasonable notice”.

But Tacon revealed at the time she had received a flood of complaints on this issue over the vegetable shortages caused by freak weather in Spain. Some suppliers, claims Tacon, were forced to pay the cost of supermarkets finding alternative sources to try to fill the shortages.

Meanwhile, paragraphs 13 and 14 of the Code ban supermarkets from either directly or indirectly requiring a supplier to predominantly fund the costs of a promotion. Supermarkets are also outlawed from deliberately “over-ordering products” or requiring activity that would entail a retrospective change to a supply agreement.

The Adjudicator’s survey, which was published in June, showed suppliers continued to experience widespread issues on all the areas now being looked into again.

Of those who responded, 23% reported issues with delays in payment, 20% claimed they received no compensation for forecasting errors and 13% accused retailers of undue care when ordering for promotions.

While all these were down on 2016, Tacon said she was worried about the the level of continued reports in the survey and wanted to find more evidence.

Tacon told The Grocer this week: “I want to find out if there is activity going on that I don’t know about which could explain why these problems continue to be an issue for suppliers.

“I need suppliers to come forward and tell me so I can find the right ways to encourage retailers to improve their behaviour.”

The GCA survey can be found at www.gov.uk/government/news/groceries-sector-short-survey