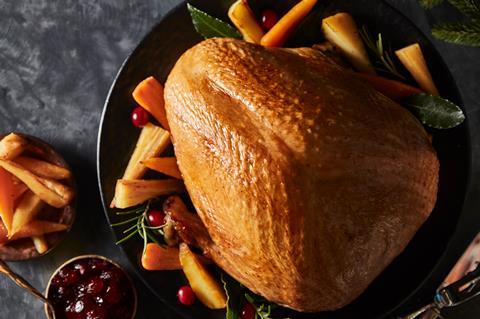 The advertising watchdog has rejected a complaint from Morrisons that Iceland luxury frozen turkey crown was not comparable to its own fresh luxury turkey crown.

Morrisons complained about an Iceland national newspaper ad that included the turkey crowns in a Christmas range price comparison.

The ad, which appeared in The Sun newspaper in December last year, compared the price of 11 products at each supermarket to claim Iceland was “Number 1 for a luxury value Christmas feast”.

Morrisons claimed it was misleading because Iceland’s turkey crown was frozen and of lower quality than its own.

But the Advertising Standards Authority ruled that many of Morrisons’ claims to superior quality could be classed as subjective and hinged on consumer taste and preference.

“While we acknowledged that there were different characteristics between Morrisons’ turkey and Iceland’s turkey, we considered that ‘quality’ overall was subjective and likely to encompass different things for different people, some of which would be subjective - for example taste, or preference for fresh over frozen,” the body said in its decision.

The watchdog said that, given Iceland was known primarily as a frozen food retailer, and the ad had said “Choose frozen”, consumers would understand the comparison.

It also ruled that “what was likely to be important to the price-conscious target audience was that the products were at the top tier of each store’s own-brand range”.

Responding to the complaint, Iceland quoted a page from Morrisons’ website, which said freezing food could lock in nutrients and freshness, and that it would be just as enjoyable after defrosting.

Iceland said it conducted regular comparison tests with rivals’ ranges on taste and quality to ensure its luxury products were up to scratch, and there was no difference between luxury frozen and luxury chilled products.

Morrisons argued that its 2kg Frozen Turkey Breast Crown, which at £14.50 was £1.50 cheaper than Iceland’s frozen turkey crown, would have made a more suitable comparison. But the ASA noted that Iceland’s 11 products would still have been cheaper overall, adding: “The turkey in question sat in the highest end of that range and was therefore comparable to Morrisons’ free range bronze turkey, which was also at the top end of their own-brand range.”

Morrisons also complained that the ad breached advertising code because the prices were not verifiable. However, the ASA rejected this too, as the ad included a website address for consumers to find more details. A link on the web page allowed them to access a table listing the names and prices of all the products compared.

“We therefore considered that the comparison was verifiable,” the authority said.