Asda turns back on Black Friday sales due to 'shopper fatigue' 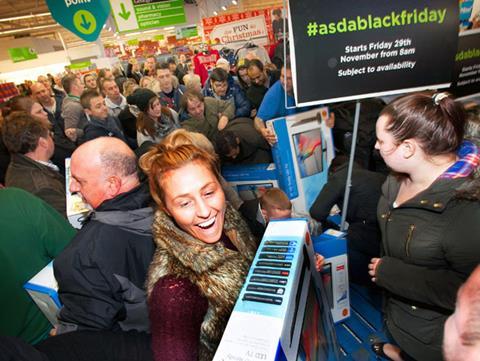 Asda has cited shopper fatigue around flash sales on big-ticket, non-essential items as the reason for its decision not to participate in this year’s Black Friday sales.

The retailer - instrumental in bringing the event to the UK in 2013 - said it had listened to customer feedback and opted to offer £26m in sustained savings across a traditional seasonal shop, rather than investing in a one-off day of sales.

Last year, Black Friday generated negative publicity for Asda, after images of shoppers fighting over discounted electrical goods at its Wembley store were broadcast on the news and went viral across social media.

“Over the last two years we have developed an organised, well-executed plan, but this year customers have told us loud and clear that they don’t want to be held hostage to a day or two of sales,” said Asda president and CEO Andy Clarke.

“With an ever-changing retail landscape, now more than ever we must listen carefully to exactly what our shoppers want and be primed and ready to act the minute their needs change.”

Instead, Asda is running a range of in-store and online offers from the start of November, continuing right through to the new year period.

These include half-price toy sales and deals on skincare, fragrance and gifting with Asda’s biggest ever 3 for £10 offer.

On festive food and drink, it has invested in key seasonal products such as beef, salmon, wine, spirits and Champagne.

“Rather than limiting value to a limited period on non-essential items, the retailer’s commitment to everyday low pricing on products that actually matter will be well-received by shoppers who increasingly plan ahead for Christmas.”