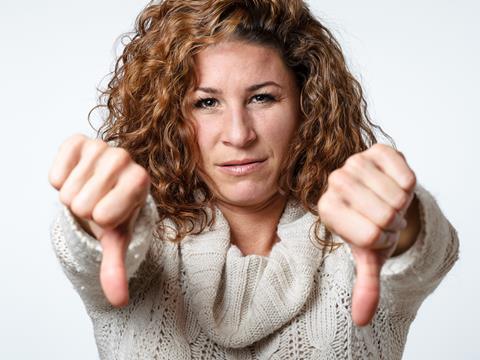 Thumbs down: some brands never recover from a boycott after negative publicity

Scandals and negative publicity can have a long-lasting impact on supermarket sales or brand performance, according to a new report.

Research from YouGov, of 2,000 consumers, shows over a fifth (21%) have stopped using a brand following negative publicity.

The report shows that of those who stopped using a brand, three-quarters (67%) still boycott it.

Tax avoidance and evasion was the number one reason for boycotting a brand (55%). Four in 10 (40%) stopped using a brand because of staff being treated unfairly and just over a third (36%) were prompted by workers in the supply chain being treated badly.

The YouGov report suggested that although some boycotting consumers did come back eventually, rarely did they use the brand as much as they did before. One in five (26%) said they went back to the brand but only 1% used it as much as previously.

Consumers had mixed reasons for coming back to a boycotted brand. For almost three in 10 (28%), they returned because the company changed their practices. Just under a quarter (24%) said they returned because the product or service improved. However, nearly three in 10 (29%) of returned boycotters started using the brand again because it had become too inconvenient not to do so, and more than one in six (18%) felt it was necessary to use the company in their work or family life. “There have been a number of cases of brands getting in hot water with consumers over the past couple of years over issues such as tax avoidance or not treating staff well enough,” said YouGov reports researcher Nasra Aharchich.

“While it is not as straightforward as saying that every time a brand is seen to misbehave it will lose customers, there is a distinct proportion of consumers who will vote with their wallets.”

The overall report, called Inside the Mindset of a Brand Boycotter, draws on the opinions of more than 250,000 consumers.