How Ukraine’s biggest supermarket chain is surviving the war 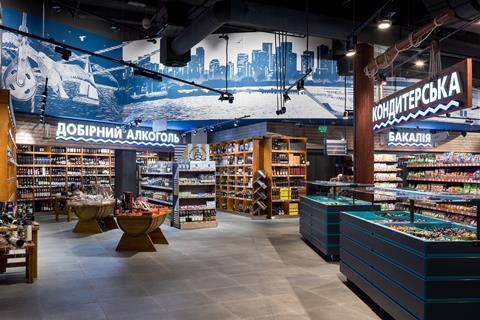 When war broke out, Silpo and other grocery retailers quickly assessed the situation and made their plans to keep the nation fed

Having grown up in Northern Ireland, I have my own experiences of conflict. The rattle of gunfire is startling but the bombs are especially unforgettable. It makes an indelible imprint on your psyche. But the Troubles are history now, and we’re seeing something on a bigger scale in Ukraine.

In 2018 I made my first trip to Kyiv to speak at the Trademaster Private Label conference. I was struck by the warmth of the people, the pride in their nation and their determination to learn from outsiders. Gradually, I built up my Ukrainian network, speaking at Kyiv Logistics School educational events and investing in learning some Russian language, with twice-weekly lessons.

Then in 2021 my IPLC colleagues and I commenced a private label strategy project with СІЛЬПО (pronounced Silpo), Ukraine’s biggest chain of large supermarkets and part of the Fozzy Group. The Silpo team had seen tough times. In 2014, Russian-sponsored separatists seized the Donbass region and Russian regulars invaded the Crimean peninsula. Silpo lost 12 stores and the Ukrainian hryvnia currency fell to a third of its previous value. This put massive pressure on company finances, but their resilience shone through and they survived.

I visited Kyiv again in September 2021 and met the entire Silpo management team to do a 360-degree engagement. Kyiv had changed in the intervening three years. It was still as proud, youthful and vibrant as ever. But serious investment had been made in infrastructure. The road to Boryspil Airport was smooth and new stores and retail centres were springing up alongside the old apartments. Going for a morning run with my colleague, up Taras Schevchenko Boulevard and down through the park, past the University Metro Station, we breathed in a city filled with hope. 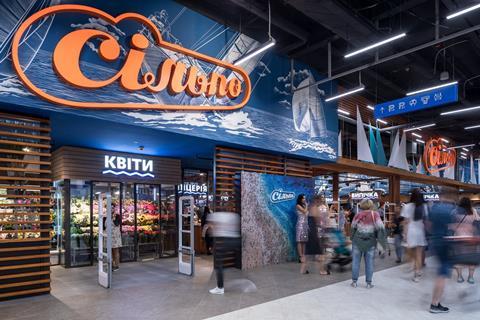 We visited lots of stores and the huge Silpo depot in Brovary that services the Kyiv market. Here, a very proud young project manager demonstrated the newly commissioned robotic picking trial. The supermarkets were literally the best I have ever experienced. Of the 330 Silpo stores, about 100 are standalone concept stores. We visited the Asian-themed store in the Ultramarine Centre and the ‘Under the Sea’ store at River Mall in Kyiv.

We also visited older stores like the Silpo on Lisoviy Avenue in the eastern suburbs. The common theme was the sense of hospitality and service. Silpo don’t have customers or shoppers. They have ‘guests’ and want to make each of these guests feel special.

Despite the tension and predictions of war in early 2022, it was business as usual for Silpo. There were ambitious store opening plans, new quick-commerce projects. The logistics transformation was well under way and the company had commissioned its own craft brewery. The week commencing February 21 started like any other week and the Silpo social media team were busy making their usual Facebook posts: 20% off Marco Cervetti Wines, a funny video encouraging plasticpackaging reduction and the health benefits of Kosher Herbal Teas.

But on February 24 the Russian Federation launched a full-scale invasion of Ukraine. Many of the Silpo team were woken at 4am by the sound of missile strikes on military infrastructure and commercial airports. I learned of the war when we landed in Turkey on our way back from our Azerbaijan project. All flights into Ukraine were cancelled. Boryspil airport was under attack.

By the end of the day, there was vicious fighting in multiple locations as Russian forces made a dash for Kyiv, Kharkiv, Mariupol, Melitopol. The key cities and airports were under siege. In the midst of this war, a shocked world looked on, but Ukrainians still needed to eat. And so the resilience that had been forged in 2014 kicked in again. Silpo and the other grocery retailers quickly assessed the situation and made their plans to keep the nation fed.

Silpo is part of the Fozzy Group, which has 68,000 employees and various other retail businesses, including 280 Fora proximity convenience stores, 90 Thrash discounter stores, nine Fozzy Cash & Carry hypermarkets, 88 pharmacy stores and Ukraine’s most extensive postal, courier and distribution network. There are company-owned food packing and production facilities too.

The two absolute priorities in the early days of the war were to keep Ukraine fed whilst keeping staff as safe as possible. Non-essential projects were cancelled and all available staff were redeployed as store assistants, warehouse pickers and production operatives. New distribution routes were needed due to the practicalities of avoiding active combat zones or bomb-cratered roads.

Delivery planning was complicated further by the mass exodus of civilians from many cities. Getting into Kyiv’s western suburbs from Brovary was hard, but getting back out to reload was another story altogether. The business adapted, but it wasn’t enough. Silpo had lost many skilled workers as they were called up to the territorial units defending the cities. The call went out for volunteers and the people responded valiantly. There was no shortage of food at this point, but they were still desperately short of HGV drivers to make deliveries. Silpo staff did their best, sleeping in underground stations and suburban basements and, despite their exhaustion and the threat of war, they brought an A-game to their guests every day.

Around this time a voice of comfort and reassurance was emerging. The Silpo Facebook page had switched from herbal teas and 20% off promotions to messages of comradeship, humanity, integrity and support. There were daily updates on opening hours, store closures, the impact of combat and curfews. The page became a reassuring voice, a virtual hug and a source of inspiration for its ‘guests’.

Now in the third month of war, the dynamics are changing and Silpo is adapting further too. Over 1,300 missiles have been fired into Ukraine by Russian forces since the invasion started. Each one of these prompts an air raid warning siren, which Silpo staff must react to by closing stores and moving quickly to the nearest shelter.

The Kharkiv depot is closed since it cannot be resupplied. The depot I visited in Brovary was destroyed in a Russian missile attack on March 12. One person was killed, another injured and a huge amount of essential food supplies were destroyed. The depot operation was moved to another location, which cannot be revealed for fear that Russia will target it a second time.

Some stores have been looted by Russian troops. As of early April, 68 stores were closed with 23 destroyed. Yet 80% of the network remains open and trading. 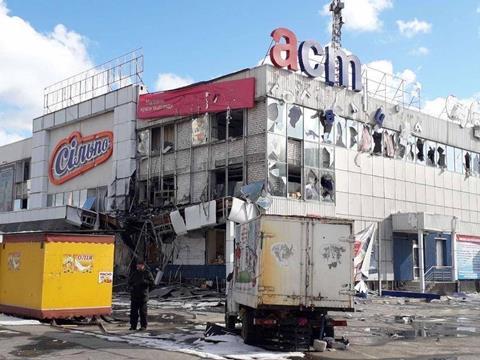 Silpo stores have been looted and damaged by Russian troops

Silpo has created a new depot in Poland to receive donations of humanitarian aid. These donations are then shipped into Ukraine and distributed to the towns struggling under the weight of internally displaced people. Silpo has created a special zone in 145 of its stores where food donations from Europe are given away to guests for free. So far, over 1,000 pallets of donated goods have been routed through the Silpo humanitarian depot in Poland.

Even in occupied Kherson, one Silpo store has stayed open and is baking bread daily. But its reserves of flour and other ingredients are dwindling quickly. There are no stores open in Mariupol, where some residents have been able to escape but the Russian encirclement has prevented any supplies going in. Apart from the merciless bombardment, death from starvation and thirst is a real and immediate problem for the 100,000-plus residents still trapped there.

But overall, morale remains high. My contact Ivan in the Silpo press room tells me that most Ukrainians remain absolutely convinced of their eventual victory. And when I tell him that many people outside Ukraine agree with his assessment, he smiles for the first time in our hour-long conversation. But nothing is certain and unless there is a breakthrough in the ongoing peace talks, there could be a long and hard road ahead for Ukraine, for Silpo, its 68,000 employees and their millions of ‘guests’.

For him, there are three priorities. First, the need for more humanitarian aid, in the form of shelf-stable foods, personal hygiene and medical supplies, which retailers can donate through Help Ukraine or organisations like Dopomoga Razom. Second, the need for trucks, trailers and fuel. Third, the need for food suppliers that can deliver direct to stores, which Silpo is arranging through a special platform that allows communication with buyers.

I finished the call by asking Ivan what he felt we could do to help the four million-plus Ukrainian refugees feel more at home after arriving in our countries.

“You will never make them feel at home because Ukraine is their home. We are grateful for your help but they have had a tough and traumatic journey. Reach out to them, show them that you care and maybe invite them around for dinner. They cannot be our guests at this difficult time, maybe they can be yours. Hopefully this terrible war will end soon and they can return to help us rebuild. But in the meantime, please take care of our guests.”