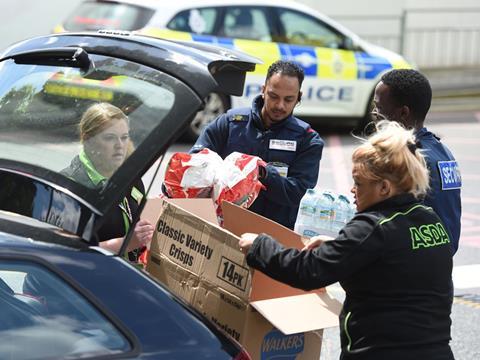 Supermarkets have responded with emergency help for those affected by the Manchester terrorist attack.

Asda’s Eastlands store is providing supplies of food and water to families who have been waiting at the nearby Etihad Stadium for news about their loved ones, after a makeshift emergency centre was set up by the emergency services.

Meanwhile Tesco is reported to have been delivering free sandwiches, fruit and water to Manchester hospitals, where families have been waiting to hear news of the victims injured in the blast at last night’s Ariana Grande concert at the Manchester Arena.

Morrisons has also been providing free food and drink to the emergency centre and for the emergency services, and a spokesperson for Sainsbury’s told The Grocer that the chain’s Whitworth Street Local has donated refreshments to the hospital for parents and relatives, and many store members and colleagues have given blood. ”We’ll continue to support in any way we can,” said the spokesperson.

The Co-op, whose headquarters is just half a mile from the scene of the attack, in which at least 22 were killed and dozens more injured, has advised its staff to work from home today, as the aftermath of the attack resulted in shock and chaos in the city centre, including the evacuation this morning of the Arndale shopping centre, amid fears of further incidents.

“Our thoughts are with those who lost their lives or have been injured,” said a Co-op spokeswoman.

“Many colleagues live as well as work in the city and we have an employee assistance line for those affected or upset by the tragedy. Our support centre near Victoria station remains open but colleagues have been advised to work from home where possible. We have offered our support to the emergency services as they continue to work on the incident.”

The retailer Booths tweeted: “Our thoughts are with everyone affected by the terrible events in Manchester last night. Thanks to all who stepped in to help #StandTogether.”