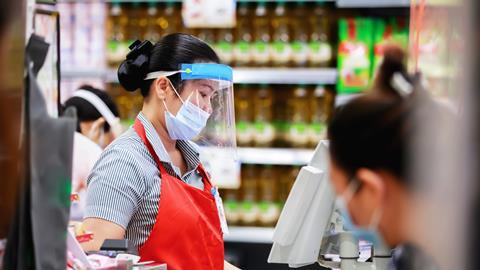 Supermarkets are now the UK’s fastest-growing industry, according to a new report by merchant payment provider Dojo.

It analysed public purchase intent data to understand how likely shoppers were to make purchases in each sector and thus uncover which industries have thrived during the Covid-19 pandemic, and which have taken a tumble. So what did it find?

In the UK, supermarkets have been the biggest beneficiary of the pandemic, the report suggests.

Having remained open throughout the pandemic – and benefited from Brits eating more meals at home due to the closure of hospitality – they saw a 6% growth in purchase intent from March to October 2020. 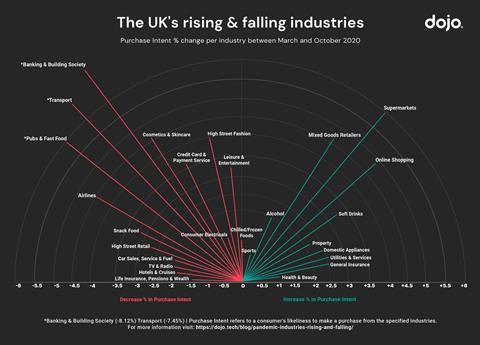 Online shopping also enjoyed strong growth of 4.9%, while soft drinks and alcohol were up 3.3% and 2.2% respectively, despite the closure of pubs and restaurants.

Unsurprisingly, pubs and fast food took a hit (–6.5%), while snack food also suffered from the demise of on-the-go lifestyles (–3.3%).

“Last year saw changing fortunes in the economy, which have forced retailers to face some of the toughest challenges in generations,” says Jon Knott, head of customer insights at Dojo. “Circumstances beyond control have led to rapid consumer shifts, that were previously unheard of.

“A lot of retailers have pivoted in order to survive, with some understandably being unable to do so.

“But we’ve also seen other businesses thrive during this time. Our findings confirm that whilst it may have been a tough year for everyone, many industries will come out of the other side, with some maybe even stronger than ever –in 2021.”

Dojo’s findings fit in with what we already know about supermarket sales throughout the pandemic. Having surged during the first lockdown, which began in March, they began climbing again when the second lockdown came into force before Christmas.

According to the latest figures from Kantar, take-home grocery sales rose by 12.2% during the 12 weeks to 24 January 2021, as the closure of cafés, restaurants and pubs saw eating out of the home curtailed once more.