What's the most efficient store size? 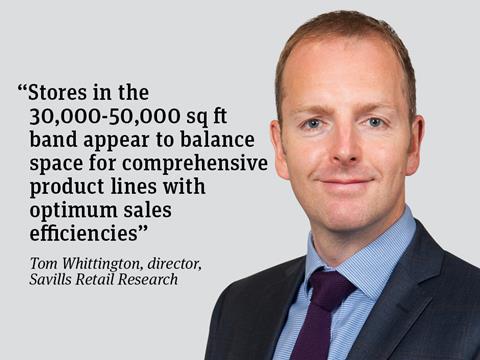 Recent years have seen sales efficiencies fall for the big four due to increased competition and spend polarisation as consumers more frequently look to either save or indulge. Aldi and Lidl have seen 10% growth in sales densities since 2008 while Waitrose’s higher price point has been resilient against a tough economic backdrop, with increases in sales densities and sales growth of 18% and 15% respectively since then.

For Tesco and Sainsbury’s the sales efficiency picture would show a more significant fall if it weren’t for their large c-store portfolios, which typically trade at much higher efficiencies. Since 2008, the c-store sector has grown substantially: Tesco and Sainsbury’s have added 1,100 c-stores; Asda, Waitrose and Aldi have more than doubled their estates, and Lidl’s portfolio has increased six-fold.

The question of sales efficiency has had a profound impact on brands’ store network strategies. Supermarket planning applications and development pipelines for 2013-2016 (where brands and size are known) demonstrate a marked direction change.

The last decade has seen both a c-store revolution and flight from hypermarkets. Concerns about the latter are linked to increased competition from the online and discount sectors. To date sub-division has only been implemented on around a quarter of supermarkets and there remain over 300 stores larger than 80,000 sq ft. Hypermarket development has all but halted; in 2015/2016 just five planning consents were granted on stores greater than 80,000 sq ft.

With the supermarket development pipeline down 30% between 2015-2016, what does this mean for optimum store sizes? The flurry of planning consents below 5,000 sq ft before 2014 shows the tail end of the c-store boom, which, while still an important growth area, has slowed due to saturation in many locations. A spike in planning consents on stores of 10,000-20,000 sq ft shows the continued rise of Aldi and Lidl, yet by 2015 Lidl was increasing its focus on stores of 20,000-30,000 sq ft, with Aldi looking to follow, chiefly through existing store extensions.

Stores in the 30,000-50,000 sq ft band appear to balance space for comprehensive product lines with optimum sales efficiencies. Tesco and Sainsbury’s are focusing more on 30,000-50,000 sq ft stores and creating strategies for cutting their largest store sizes. Asda has had a strong focus on increasing its 10,000-30,000 sq ft format and significantly reduced its over-exposure to hypermarkets. We estimate over 50% of Asda’s stores greater than 100,000 sq ft have been ‘right-sized’ and the largest percentage of its portfolio is now in the 50,000-80,000 sq ft bracket, more than any other brand.

Much of the growth in supermarket sales and market share over the last two decades was achieved through vast portfolio expansions. However, with a markedly reduced development pipeline in play, we expect supermarkets to focus on growth through efficient use of existing space, cost-cutting, further partnerships with other retailers and other innovative solutions.