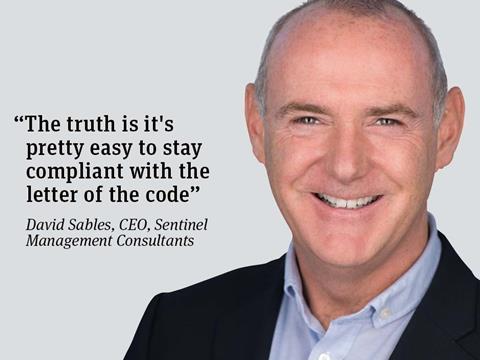 Reflecting on the variety of missives since last week’s GCA conference, it’s unanimous: Christine Tacon has done well! Even the most cynical have said it and so do I. The collaborative approach of quarterly parleys with retailer CCOs has proved a good way to get suppliers to come forward and report issues. Five years on, the signs are that things have improved.

Although the quarterly meetings have worked, the other formal route to invoke GSCOP through the buying line falls short, as the code naively expects senior buyers to over-rule their buyer. It’s far more likely that the senior buyer will support the buyer while technically ensuring the language used circumvents the code. The truth is it’s pretty easy to stay compliant with the letter of the code. Take Sainsbury’s a few weeks back. While telling suppliers they should drop their cost prices 20% at the IGD meeting, the presenter looked knowingly into the audience and smiled as he said that this of course was a “request not a requirement”. It will be interesting to see where it ends up on next year’s league table; Iceland coming bottom with no complaints against it shows the confusion suppliers still have.

The reduction in reported issues reflects both an improved adherence to the code by retailers but also less misunderstanding by suppliers and the importance of just getting on with business and being stronger in negotiation. So yes, get training, but in isolation GSCOP training is no more use than reading the code. Training in this subject works best when brought together with your negotiation skills to disarm bad practice rather than escalate.

The code compliance officers made short videos for the GCA conference to show how approachable they are. They are stepping up in a meaningful way. I still believe, however, that this crucial group can do more to reassure the 48% who would not come forward, of which 47% say it’s for fear of retribution. Their issue is about punitive action at the next range review rather than doubt about CCOs’ approachability or ability. If raising issues to the CCO put suppliers on a monitor list to track them for a further 12-month cycle past a range review, that would be tangible progress.

A Sainsbury’s spokeswoman responded: “We have had really positive comments from suppliers on our objective of creating a home for brands at Sainsbury’s. Customers are at the heart of our strategy and this is a great opportunity for brands to differentiate themselves more. We believe that, working with suppliers, we can eliminate inefficiency from the value chain. We led the industry on value simplicity, making buying brands at Sainsbury’s simpler for customers and we now want to work with brands to make them more distinctive and rewarding for customers.”