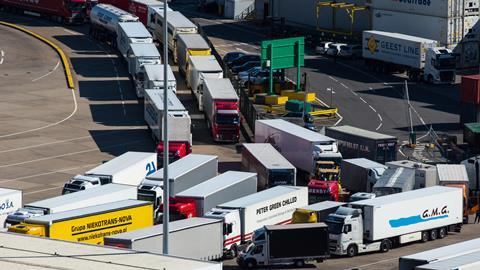 As food shortages loom, how to solve the driver crisis?

The shortage of HGV drivers is threatening food supplies, but the government has proved reluctant to take action. What is the way ahead?

The Road Haulage Association has called it “worse than Covid” in terms of its potential to impact UK food supply chains.

The crippling shortage of HGV drivers, estimated to be a void of 100,000, is leaving logistics networks unable to meet demand.

Calls to mobilise qualified army personnel have been made by both the RHA and the Federation of Wholesale Distributors, as industry leaders scramble for emergency solutions to keep supplies flowing.

Convenience store retailers have complained of being left with empty shelves as wholesalers fail to deliver. Tesco has reported tonnes of food going to waste in its supply chain in a week amid delayed deliveries (see box, right).

And in the latest developments reported by The Grocer this week, leading brands are warning of disruption.

So how, after proving so resilient amid last year’s wave of panic buying, how did supply chains end up so apparently in jeopardy now, and what can be done to mitigate them in the short and long term?

How the HGV driver shortage came about

The pandemic was the first, causing swathes of hauliers to repatriate to the EU last year, says the trade body.

And lockdown put HGV driving tests on hold, creating a backlog of 30,000 applicants that has yet to be cleared, says RHA CEO Richard Burnett.

The second factor, according to the RHA, was Brexit. From 1 January 2021, those repatriated HGV drivers were no longer eligible to return to work in the UK, since the job is not on the Home Office’s Skills Shortage Occupation List.

Then in April this year came HMRC’s introduction of new IR35 tax rules, meaning self-employed hauliers working shifts via agencies were switched to employed status if they drove for a sole company and didn’t own their own vehicle. The PAYE tax model, now applicable to those drivers, has put huge strain on haulage company budgets, says a leading national haulage firm director, whose business had to change the employment status of 80% of its drivers and was forced to raise its prices on key routes as a result of the new tax rules.

During the busy summer and Christmas seasons, many logistics companies, wholesalers and supermarkets supplement their fleet with agency drivers, but the numbers of those have also fallen.

Worse still, the new pressures have been heaped on an already depleted workforce, with a historic shortage of up to 60,000 drivers, according to the RHA. The group puts the average age of an HGV driver at 55, with only 1% of them under 25, meaning the workforce already badly needed fresh blood.

The HGV driver crisis is not just threatening supplies to retail and hospitality. It is also causing thousands of tonnes of food a week to go to waste, denying meals to those most in need.

48 tonnes: amount of food Tesco told ministers had gone to waste in its supply chain in a week in June amid delays

800,000: the number of potential meals a week denied to those in food poverty as a result of FareShare’s depleted supplies

2.5 million: meals redistributed by FareShare in the year to March 2021, double that of the previous year, as demand from those struggling to get enough to eat soared

8%-10%: proportion of total GHG emissions for which food waste globally is responsible

How bad could it get?

“Schools, hospitals, prisons, care homes and ‘extremity’ customers [in remoter locations] could simply be left without food. And ultimately supermarkets will not be immune either,” says FWD CEO James Bielby.

A national haulage company director warns: “There are a series of stress points on the horizon which will put demand at the highest we will ever see. Worst-case scenario is prices will go up while availability decreases. Consumer choice will be vastly reduced in as little as a month’s time.”

One looming stress point is so-called ‘freedom day’ on 19 July, when coronavirus restrictions are due to end.

Large hospitality venues will be allowed to reopen, but there will be “no capacity to supply them at this rate”, a wholesale source warns.

Additional pressure will come with the anticipated staycation boom, likely to peak in school summer holidays. Coastal and rural locations are tipped by Cold Chain Federation CEO Shane Brennan to be worst hit by shortages.

Meanwhile, wholesalers are already trying to plan for the return of schools, colleges and universities in September – widely seen as one of the sector’s busiest weeks.

The threat to the education sector was in the spotlight this week after Sheffield City Council issued schools with ration packs of frozen and dried goods, to supplement wholesale deliveries.

“We are in an emergency situation and we need some solutions,” says Association of Convenience Stores CEO James Lowman. “There is no sign of things improving yet. If anything it is going to get worse.”

Is there a way out?

On 28 June food and drink and logistics leaders warned government for a second time of the severity of the situation.

But despite Defra director general David Kennedy reassuring the meeting it would take to government a series of requests, government spokespeople have maintained “most of the solutions are likely to be driven by industry”, while dismissing notions of a serious threat to food security.

In a new letter this week from the RHA, signed by a string of food, drink and logistics trade associations, prime minster Boris Johnson was urged to issue temporary visas to HGV drivers in the EU and EEA. The letter also stresses a need for HGV drivers to be added to the Skills Shortage Occupation List.

Johnson was this week asked directly during PMQs by MP David Linden why the latter step could not be taken, and replied: “The most important thing is to get our entire workforce back to work. There are a million people still on furlough. Of course there are labour shortages at the moment, but we must get people back to work, which is why we must roll out the vaccines as fast as we are.”

Wholesalers have also come together via the FWD to call for the end of furloughing for HGV drivers. The trade association says: “It is inconceivable that HGV drivers should be furloughed, but given that the lack of supply drives up demand and prices, there is an incentive for agencies to keep drivers furloughed.”

It is also calling for the extension of driver hours to give distributors an extended time window in which to deliver, an emergency measure the government implemented during the pandemic, but which expired on 31 March 2021.

Meanwhile, a string of businesses have launched large-scale HGV driver recruitment campaigns. Driver wages have been hiked by 20% in some locations, with bonuses thrown in. Smaller businesses complain it is creating a wages war that favours large companies with bigger budgets.

To tackle the shortage of HGV licence holders, some wholesalers are hiring fleets of smaller vans, which are being driven by office-based employees who hold a standard driving licence.

But the emergency measures do not come without additional complications. “How long can we be out on the road until the business begins to suffer operationally from the lack of office staff?” adds a source currently seconded to making deliveries in a van.

Sector leaders maintain it is now down to government to extend crucial support to shore up the supply chain and stem the worsening crisis before it slips beyond control.

Lyndsey CambridgeLyndsey is a reporter on The Grocer, covering the convenience and wholesale sectors