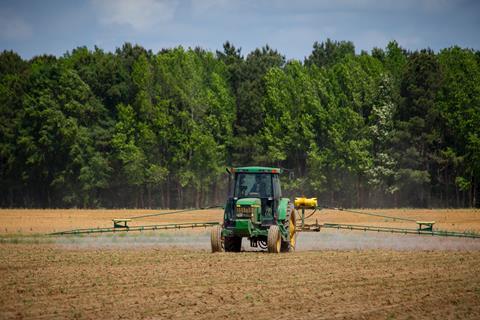 While pesticides can be beneficial for crop pest and disease control, alternative approaches are increasingly encouraged

World population has increased from one billion in 1800 to 7.7 billion today. During this period, the use of pesticides has played a critical role to protect crops from insects, weeds, diseases and moulds, ensuring that food supply keeps up with the increasing demand.

As well as being harmful to pests, it is increasingly recognised that pesticides can be harmful to the wider natural environment, animal and human health, the latter especially for high-dose exposure of operators. That has resulted in the use of pesticides being increasingly heavily regulated around the world.

Ancient civilisations used multiple types of pesticide for centuries. These included sulphur, arsenic and mercury, and plant-derived pesticides such as azadirachtin from the neem tree, nicotine from tobacco, pyrethrum from chrysanthemums and rotenone from the roots of tropical vegetables. The knowledge acquired over those centuries, coupled with better scientific tools to explain their properties, allowed scientists to synthesise similar chemicals at large scale.

Soon after the Second World War, organochlorine pesticides were introduced as insecticides. Discovery and commercialisation of other insecticides followed in subsequent years when organophosphates, carbamates and pyrethroids were introduced. More recently, in order to reduce reliance on synthetic chemicals, the use of natural pesticides (which include organisms and pheromones) has become more widespread.

Since the 1960s, governments around the world have introduced measures to regulate pesticide use. This has resulted in bans on most of the older pesticides that were deemed to be of highest environmental and adverse human heath impact. It is a legal requirement under these regulations that new pesticides are tested to assess the risk to consumers and the wider natural environment before authorisation for market release.

Whilst there is a statutory requirement to monitor residues in food by national authorities, it is prudent for food producers, importers and retailers to also have adequate risk-based due diligence testing regimes to complement the official monitoring work. This is especially more important now with the widening of our global trading partners post-Brexit.

Currently the UK food industry relies heavily on imports from EU member states, who all follow the same harmonised food safety regulations and quality standards. As it looks further afield to non-EU countries with different regulations and likely different requirements to protect crops from pests and disease in their climatic conditions, the industry may need to give further consideration to additional testing regimes to maintain similar standards and manage the risk of MRL exceedances.

The current regulations also require monitoring of pesticide levels in food by food safety authorities. Maximum Residue Levels (MRLs) have been set, taking Acceptable Daily Intake (ADI) and the Acute Reference Dose (ARfD) into account. MRLs are a commonly accepted useful standard to facilitate international trade and act as an indicator that those pesticides have been used as authorised. If followed correctly, these regulations ensure most foodstuffs reaching our shelves will not contain any measurable pesticide residues that are likely to have adverse effects on consumer health. Where residues remain, they are required to comply with the defined MRLs. Across the EU, harmonised pesticides regulations came into force in the early 1990s. The extent to which they will continue to apply in the UK from next year is not yet certain and is wrapped into the UK’s EU negotiations.

Whilst pesticides can be beneficial for crop pest and disease control, alternative approaches to pesticides including alternative methods of crop management and application of non-chemical (biological and mechanical) controls are increasingly encouraged. Where pesticides are used, producers should adhere to the label instructions and follow the good agricultural practice (GAP).

Use of pesticides in agricultural production is part of our everyday life worldwide and plays an essential function in supporting domestic food production and food security. It is not always straightforward to class pesticides as either ‘good’ or ‘bad’. Moreover, each chemical and application regime presents a different level of risk to human health and the environment. Since consumers and operators can be exposed to pesticides through many routes, it is therefore critical to monitor the levels present in the whole system and their environmental fate.

To ensure consumer safety and determine the levels of pesticide residues in our foods, Fera – as the National Reference Laboratory for pesticide residues – and our partners have designed and built Europe’s first full-flow-through outdoor mesocosm facility. This new piece of science infrastructure will help researchers and industry evaluate the full ecosystem impact for new chemical and alternative interventions for pest and disease control, thereby to accelerate their introduction.